Aikawa (会川 Aikawa), also known as the Man of Lan Evo V (ランエボVの男 Ran'ebo V no otoko, or Black Evil (黒悪 Kuro Waru) is the uphill racer for the Tsuchisaka Lancer Evolution Team that Project D races in the Saitama Prefecture. He faces Keisuke Takahashi on the uphill run on the Tsuchisaka pass. Unlike previous opponents, both Aikawa and his racing partner Ichijo are more than willing to use cheap, unfair tactics, such as spilling oil on the road, to defeat Project D (albeit they want to win only to promote a garage they are affiliated with). It is due to this team's slicking of the road with oil that leads to Keisuke spinning out on the road and damaging his FD to such a state that it cannot be used in the race. He is on the line with Shingo Shoji in terms of jerkiness.

As a person, Aikawa is depicted as being an "ugly", mid to late 20s, arrogant jerk, an example of which occurs when he confronts Project D after Keisuke crashes his FD, at which point he acts innocent in regards as to who was at fault for slicking the road. In his race versus Keisuke (who drove Kyoko's black FD), he displays little skill (Keisuke compares him to Atsuro Kawai, the ER34 Skyline driver of Seven Star Leaf) and considers the Lancer Evolution to be in a totally different class apart from the Mazda RX-7 FD. He loses when he was spooked as Keisuke takes the inside when the two cars drive along a long straightaway with a construction barricade on the left side of the road, much to his anger as he berates for nearly crashing. After losing the race in anger, he was humiliated when he was given a lecture by Keisuke when he complained of "reckless driving." After Ichijo loses the race to Takumi, Aikawa and the rest of the team decide to call a Bosozoku gang to beat up Project D. However, he finds out that the gang was from Gunma and former subordinates of Keisuke Takahashi. As a result, the gangsters turned on the losers, including Aikawa.

In Arcade Stage 3 and in the PSP version (and later Arcade Stage 8 Infinity), the Evo V is an RS, while in the anime, it was a GSR. 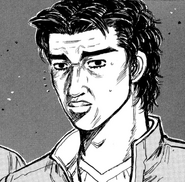 Aikawa in the manga 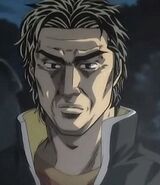