The Akagi RedSuns (赤城レッドサンズ, Akagi Reddosanzu) was a highly skilled team led by Ryosuke Takahashi. At the beginning of the series, they were considered to be the fastest team in Gunma. The RedSuns' team policy is not to race on their home course, because, according to Keisuke Takahashi, they "can't get excited about it". Based in Gunma, their home course is Mt Akagi. The team consisted of the Rotary Brothers Ryosuke & Keisuke, Kenta Nakamura, plus additional racers only seen during the first episode such as a green RX-7, a white Supra, and several Silvia model cars. Sometime after Takumi Fujiwara defeated Wataru Akiyama in second stage, Ryosuke would later disband the RedSuns, in favor of creating Project D.

They started off their first expedition in Akina by challenging the locals known as Akina SpeedStars to a friendly race. Before they can challenge them, they did a practice run. None of the locals were a match for the skill and technique of the rotary brothers and decided not to take part in the time attack. Keisuke was ordered by Ryosuke to be the first to race them. At the conclusion of the practice run, the RedSuns that spectated including Keisuke stayed which puts the SpeedStars at a disadvantage. In midnight while heading back to Akagi Keisuke was being outrunned by Takumi while on a tofu run with an inertia drift while Keisuke slips out. That made Takumi their prime target. Keisuke then pulled up at the gas station to fuel up and issued a challenge to the Eight-Six driver. Bunta sends Takumi to Akina to race Keisuke on a downhill race after Iketani injured himself at another practice run. As he pulls up, Keisuke was surprised he was outrunned by someone younger than him. The race begins with Keisuke leading. But Takumi defeats Keisuke with the gutter run which further upsets Keisuke. Ryosuke investigated his defeat and scrapped their expedition until they can defeat the Eight-Six in Akina. Takeshi Nakazato challenged Takumi next. Takumi initially declined leading Keisuke to confront Takumi to accept his challenge since he's already becoming a street racer (in which Takumi denied) because he refuses to allow him to be beaten by anyone else but either himself or his brother.

On Takumi's battle with Nakazato, the Takahashi brothers spectate the race by joining them to observe the Eight-Six's capabilities as well as Takumi's to find a strategy on how to beat him. This then would give them a formidable race they deserve. Takumi won the race that night. Shingo became his next opponent in a gumtape deathmatch. The Takahashi brothers spectated that battle and saw how Takumi was able to adapt to the situation when he drifted without leaving the lane during oncoming traffic despite his hand being taped on the wheel. Ryosuke then officially challenges Takumi to a battle in Akina. Since neither Keisuke nor Nakazato were able to defeat the Eight-Six, Nakazato challenges Keisuke in an uphill rain battle in Myogi. Keisuke won by a small margin when sinking his rear tyres on the gutter to trap Nakazato on the straightaway. After Keisuke's victory, Kenta Nakamura whom specialises in running in rainy conditions challenges Takumi on a rainy downhill battle. Takumi emerged victorious despite weather conditions on his advantage. Before racing Takumi, Ryosuke practices on Akina and makes minor adjustments to his FC by downgrading it sacrificing power to more speed in the corners for better control in order to match Takumi's cornering capabilities. At the starting line, Ryosuke tells Keisuke tht he will retire racing if he loses.

Finally it was Ryosuke's turn to try and defeat Takumi on a downhill race. Keisuke volunteers to do the coundown of the race. Both drivers were nearly as equal as one another and shattering the time trials. Ryosuke overtook Takumi after botching his drift while being under pressure with Ryosuke's drifting. At the same time he stressed his front tyres while trying to copy Takumi's moves. Takumi seemingly is losing until he uses the gutters to his advantage to shorten the gap. With the last corner approaching, both cars enter the corner drifting side by side with Takumi drifting outside then cutting inside while Ryosuke sliding outside due to low tyre pressure and grip. Takumi wins the battle smashing his course record and ending Ryosuke's winning record. Keisuke was in disbelief of his brother losing. Ryosuke tells him he was the fastest driver he ever came up against and drives off.

After Takumi's victory, Team Emperor became a new threat to Gunma's racing teams crushing every team and claiming territory as their own. Kyoichi Sudo whom is Ryosuke's rival challenged him to a race after being beaten by him the previous year ending his winning record. Ryosuke then tells him that his winning record too got broken by the Eight-Six at Akina. Ryosuke accepts his proposal despite wanting to retire after losing to Takumi because he is unwilling to be accused of cowardice by his acquaintance. Kyoichi changes his plans in order to defeat Ryosuke, they must defeat Akina's Eight-Six after first doubting such story by Itsuki. Kyoichi's best driver Seiji Iwaki volunteers to take on Takumi. Keisuke and Kenta spectate the battle to see if he can beat him. Keisuke hopes for Takumi to win before he can rematch him from the two battles he lost against him. Takumi won the battle that night. Kyoichi nonetheless keeps his word to race Ryosuke despite their Gunma dominance shattered.

The RedSuns then prepare for Team Emperor's upcoming invasion. But Takumi unexpectedly arrives in Akagi to race Sudo whom challenged Takumi for a practice race before he races Ryosuke. It resulted with the Eight-Six's engine to suffer a blowout which stunned the RedSuns. Keisuke hoped to tell Takumi (but didn't turn up at work due to discouragement) he didn't really lose but the team will avenge his defeat. In Battle Stage, Keisuke races Seiji first and won. The main battle between Ryosuke and Kyoichi begins. The previous year Kyoichi confronted Ryosuke whom he lost to how his circuit racing theory is superior to mountain racing and how he could have won. After an argument, Ryosuke calmly tells him to race him again if he wants to prove him wrong. Ryosuke won again due to Kyoichi's fear of right-hand turns which would often have head-on collisions and circuit racing doesn't have any of that. And mentions that his home turf Irohazaka in Nikko is a one way road which means he didn't have enough practice as shown when he raced Takumi proving his theory was correct and he realised he had been delusional to believe so.

After his comeback, both brothers saw how Takumi isn't coping well with his new engine. Wataru Akiyama later challenged Keisuke in Akagi. He refused the offer due to their policy to not race on their own turf. Wataru nonetheless shows them off which caused them to have a close-run accident. They later spectate Takumi's battle with Wataru to see how well he can adjust through the changes of the new engine. After Takumi's victory, Ryosuke sets up a time trial in Akagi to select a suitable candidate to join his new race team.

Extra Stage shows nothing too peculiar about the team except for when Keisuke enters Ryosuke's room to talk about the sudden presence of the Emperor team and their sweep in Gunma.

Ryosuke pulls up to refuel his car and asks Takumi to see him after he finishes work. He offers Takumi a spot on his newly created race team to make history by challenging the locals in an expedition throughout the Kanto region within a year before he retires. Takumi was indecisive due to an unfinished race against his acquaintance Kyoichi Sudo after an engine blowout. Takumi won the rematch held in Irohazaka and Keisuke encourages Takumi to join them after hearing of his victory before he can defeat him in a rematch and turn pro. Ryosuke was challenged by Takumi for a second battle in Akagi before he decides. That race was revealed to be for show as Keisuke said to Kenta. The race concludes with both drivers driving side by side with Takumi accepting to join the ranks which officially disbands the RedSuns leading to the creation of Project D. Ryosuke would run by that team name throughout the stages as well as acting as their coach. 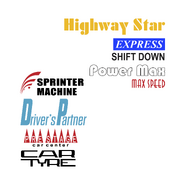