The Akina SpeedStars (秋名スピードスターズ, Akina Supīdosutāzu) are a team made up from a bunch of friends who like to race in their leisure time. Based in Gunma, their home course is Akina. Named after a Japanese brand of wheel, they are one of the weakest teams in the series, not having proper training and using erroneous techniques. In the manga version, it is called "Spirit" as seen on the sticker on Iketani's car. In the first episode, there were many other racers of the Akina SpeedStars who may have left after their brief run against the Akagi RedSuns or sometime when Takumi Fujiwara became the team's best weapon against other crews (despite Takumi not being part of the SpeedStars). 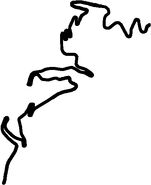 A basic map of Akina

The Akina Speedstars in Legends

Retrieved from "https://initiald.fandom.com/wiki/Akina_SpeedStars?oldid=22757"
Community content is available under CC-BY-SA unless otherwise noted.