Bunta Fujiwara (藤原 文太 Fujiwara Bunta) is the owner of a tofu shop in Gunma, and the father of Takumi. He used to be the No.1 downhill racer in Mt. Akina years ago, but he no longer races, preferring to guide Takumi's racing development.

He is the original driver of the mysterious "white ghost of Akina" AE86 Sprinter Trueno that holds the record of the fastest downhill time at Akina. Bunta has a unique way of training his son to drive - every morning when Takumi delivers tofu. Bunta gives Takumi a cup of water which is placed in the drink holder; Takumi must not spill even a drop of it while he is driving. This is ostensibly to prevent breaking the tofu in the boot, but it forces Takumi to drive very smoothly. As for Bunta, he is still considered the best downhill racer in Akina, which is shown early in the series when he pushes the Trueno with Yuichi Tachibana in the passenger seat, lighting a cigarette while drifting around a corner.

Later in the series, Takumi used the Trueno more than Bunta, so he gave the car to Takumi. While test-driving his new Subaru Impreza WRX STi Type R Version V on Akina, he defeated his son, inducing an 4WD complex in Takumi. Bunta decided to buy the car but hid this fact from Takumi for some time. After revealing that he was the driver, he then told Takumi to alternate between the Impreza and his Eight-Six for deliveries - another strategy to improve Takumi as a driver, showing him the potential of modern cars and the characteristics of 4WD. While this shows his training strategy, it is seen that Bunta is, once again, proven to be the most formidable opponent in Akina.

Bunta is thought to have been undefeated during his time as a street racer. There is some dialog between Tachibana and Koichiro Iketani that could possibly dispute this, but the vague description of events leaves the actual results up to speculation. Specifically, this dialog occurs during the Tochigi campaign (Volume 15 of the manga, or the Third Stage movie) when Tachibana explains the rivalry between Bunta and Ken Kogashiwa. According to Tachibana, Bunta and Ken completed multiple races on the Irohazaka road to determine who was truly the fastest street racer, and "on the last race that counted", Bunta won. This could mean that Bunta possibly lost one or more rounds, could also mean they had unofficial races similar to Takumi vs the EVO but this idea is never discussed further as the dialog was written solely to provide a racing pedigree for Ken's son, who had recently challenged Takumi to a race on the same road.

Personal Data: Believes that when he's racing down Mt. Akina, he can break the sound barrier

Occupation: Used to be a freelancer, now he owns a tofu shop

Likes: The sound of a carburetor, cigarettes

Special Skills: Being able to drift while he's asleep

Being able to see with his eyes closed 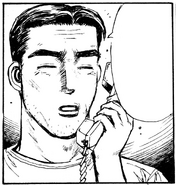 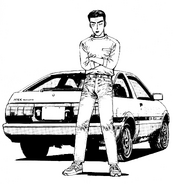 Bunta on the cover of Chapter 8

Bunta being angry after seeing the AE86 having scratches 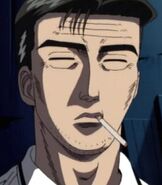 Masashi and Bunta during the change of new engine on AE86.

Bunta driving the truck with the broken Eighty-Six

Bunta in a suit during Takumi's highschool graduation ceremony

Bunta and Yuichi at a restaurant in Fourth Stage

Bunta driving his Impreza as imagined by Takumi in his battle against Dr. Toshiya Joshima

Bunta and Takumi with his Impreza

Bunta in a Final stage eyecatch

Bunta at the gas station in Final Stage

Bunta in the end credits of Final Stage

Bunta and Yuichi in Legend 2

Bunta on Mt Akina with Yuichi

Bunta driving his AE86 and drifting 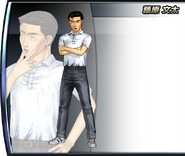 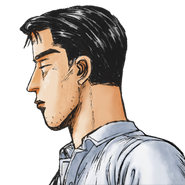