After his son, Takumi, joins Project D, Bunta Fujiwara plans to get himself a new car, as the Eight-Six that him and his son use is used by Takumi more than himself. He asks his friend and mechanic Masashi Suzuki to find him a new car to drive, eventually getting him a Subaru Impreza. During a test drive of the new Impreza, he enters into an impromptu battle with his son on Akina's downhill, performing a gutter run alongside him before passing him on the straightaway. After this encounter, Bunta decided to buy the Impreza, keeping it a secret from his son.

After Project D's second set of battles with the Northern Saitama Alliance, Bunta reveals the Impreza to Takumi, who realises that Bunta was the racer he battled on Akina. Bunta tells him that he should alternate which car he uses for deliveries from now on. Bunta made this decision so that Takumi can realise the weaknesses that his Eight-Six has, and so that he can become a better driver

Exclusively in the anime, Takumi passed a Toyota GT86 while on a delivery run on Akina.

This car is a 1998 Subaru Impreza WRX STi Coupe Type R Version V, chassis code GC8F. It is painted Sonic Blue Mica, but it is painted Cool Gray Metallic in the manga and early games.

The Impreza in Chapter 258
Add a photo to this gallery

The Impreza in Fourth Stage

The Impreza in Fifth Stage

The Impreza in Final Stage
Add a photo to this gallery

The Impreza in Arcade Stage 8 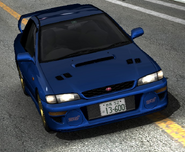 Ditto, in-game
Add a photo to this gallery

Retrieved from "https://initiald.fandom.com/wiki/Bunta_Fujiwara%27s_Subaru_Impreza?oldid=30570"
Community content is available under CC-BY-SA unless otherwise noted.