Fake Project D (ニセプロジェクトD Nisepurojekuto D) were a duo of unnamed racers that briefly impersonated the real Project D in the Saitama region, until they were exposed by both Wataru Akiyama and Project D.

Project D imposters were first seen after Project D completed their expedition in Ibaraki and were moving towards the Kanagawa prefecture. Takumi the SpeedStars initially heard rumors from Kenji about Project D visiting the Saitama area, but in reality Project D did not visit the area after their expedition there. The next day, Takumi and Itsuki headed out to Sadamine in Itsuki's AE85 for a change, when they suddenly encountered the Fake Project D visiting the area. Takumi noticed that though they had the same car models as that of Project D, they did not have the same modifications, plus they even had 'Project D' stickers in their cars as well as their shirts. On seeing all the people over there going towards the fake Project D and stealing the original's glory, Itsuki was not able to take it anymore and directly confronted in front of them. He said that his friend with him was the original Takumi Fujiwara. Then the Fake Takumi asks Itsuki on showing their driving licenses, but Takumi had forgot to bring it. On realizing it, the Fake Project D laughs and goes away.

Later on the next day, a woman named Mika Uehara visited the Gas Station to see Takumi Fujiwara. When Takumi arrived at her, she slapped at his face. On shock, both Takumi and the SpeedStars nearby asked on why she did it. Mika explains that her friend was dumped by someone named Takumi Fujiwara from Project D and she wanted to avenge her friend. On explaining to her about the imposters, she still didn't believe the fact that much, but since she had no idea about the face of Takumi her friend had been with, she takes a picture of Takumi and sends it to her friend. On getting no response from her after some time, she leaves and says she will return soon. Takumi was still enraged on the damage the Fake Project D had done on him. Meanwhile the real Project D gets information of the imposters and plans to expose them.

After Mika gets the confirmation from her friend that the Takumi she slapped was not the one her friend got dumped, Mika meets up with Takumi and apologizes to him for the damage she had done to him. Meanwhile Project D was ready with his now repaired and upgraded Eight-Six, which was previously damaged on its suspension from its battle with Dr. Toshiya Joshima of Purple Shadow. Meanwhile at Saitama, the Fake Project D was visiting the area once again, when Wataru Akiyama makes an appearance. He confronted himself to the Fake Project D and asked them in front of everyone to show off Fujiwara's ultimate drifting technique by drifting throught the bridge at high speeds by only using the accelerator. When Fake Takumi said that 'Ryosuke' won't allow them to show off in front of public, Wataru said that him and the crowd here will keep it as a secret. Enraged and out of options, Fake Takumi says that no one can do such a crazy stunt, to which Wataru responds to as nobody can, except for one guy, as he hears the tire squeals of Takumi's Eight-Six appearing closer. Then he gathers the Fake Project D's and the crowd's attention, and as he says 'This is real drifting' while he snaps his fingers, Takumi Fujiwara drifts his Eight-Six at extreme high speeds, shocking everyone from Fake Project D to the crowd to Wataru himself. On realizing that was the real Project D, the fake Project D tries to escape, but then Keisuke Takahashi arrives in his FD3S and him along with Wataru was about to bash the Fake Project D for being 'too ugly to be his imposter', then Fumihiro stops him from doing so, and explains to the Fake Project D on the consequences of impersonating them ever again. Afterwards Takumi asks Fake Takumi to apologize to Mika's friend for the damage he had caused to her. 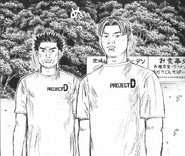 The Fake Project D in chapter 426