Alexandre Coadour
Go Hojo (北条 豪, Hōjō Gō) is the leader of Sidewinder, and the team's uphill driver. Alongside Eiji Kubo, he organised Kanagawa's four lines of defence, four teams intent on beating Project D, or, failing this, gathering enough information to help the next team beat them.

He seems to know Ryosuke Takahashi quite well. However, he does not have any past connections or quarrels with him. Instead, he knows him through his elder brother, Rin, who had a past quarrel (or connection) with Ryosuke alluding to a girl named Kaori. Hojo helps the Chief Mechanic of Sidewinder, Eiji Kubo, to evaluate Project D's weaknesses. Before the race, his older brother appears and tells Go to have fun in his battle. Eiji told him to use their plan successfully for the first round. However, Hojo didn't use the plan as he should, so they ended up doing a second battle. What's worse was that Keisuke Takahashi kept on speeding his ride to lose sight of him. In the end, Hojo lost the race after he spun out while engaging himself to keep up his ride against Keisuke, the main reason is that he wore out his rear tires.

When Shinji Inui lost the race to Takumi, Go confronts him on the loss, but was never angry at him and told Shinji that he still did his best. 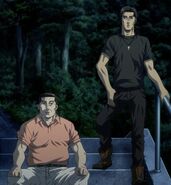 Go Hojo after Keisuke wins his battle against Minagawa Act 6

Ditto after Takumi wins his battle against Okuyama Act 8

Go Hojo before his battle Act 12

Go meets his brother Rin before the race

Go Hojo at the start of his battle with Keisuke Takahashi

Go Hojo just before he starts his sprint against Keisuke Takahashi

Go Hojo with Eiji Kubo before his second round

Ditto, before the battle starts

Ditto, just before starting off

Go in his NSX

A young Go Hojo seen in a flashback in Act 14

Go realizing where Keisuke will start his sprint

Go tries to keep up with Keisuke's sprint

Go tries to control his car from losing control

Go entering a corner to catch up with Keisuke

Go Hojo after his car spins out

Ditto, speaks to him

Ditto, listens to her

Ditto, thinking if that move was too early

Ditto, Eiji talks to Go on how he changed his viewpoints