At the start of the battle, Hideo states he plans to go all out in an attempt to pressure Keisuke into making a mistake and capitalize, even saying he could pass after he makes a mistake in the battle. But Hideo didn't predict the hillclimb to be at such a high pace and ends up causing his tires to wear throughout the race. Halfway through the battle in the technical section, Keisuke taps the brakes to cause Hideo to let off the gas and his turbo to spool down, which creates a gap. Towards the end of the battle though, Hideo closed the gap Keisuke made, but in the last straightaway, he concedes the race after lightly tapping Keisuke's rear bumper due to the fact that he lost all his tire grip to go for a second round.

He later on spectates Project D's final battles against Sidewinder with Kai Kogashiwa. 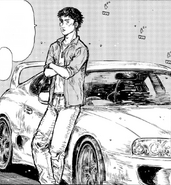 Minagawa with his Toyota Supra 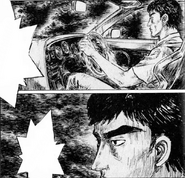 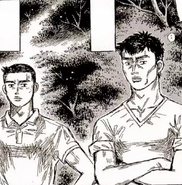 Minagawa about to battle with Keisuke

Minagawa in his Supra battling Keisuke

Minagawa and his Supra seen in a Fifth Stage eyecatch