Honda Integra (sold in some markets as Acura Integra) was a compact luxury sports car, produced by Japanese automaker Honda from 1985 to 2006. The sporty front-wheel-drive car was able to carry five passengers with a two-door coupe or four-door sedan available. The Integra name was originally used by Honda to refer to its VT250F motorcycle and is currently used to refer to the scooter variant of its NC700 series of motorcycles.

Smiley Sakai, one of the Todo School students, drives a white, modified Honda Integra with Spoon Sports modifications. He uses this car to race against Keisuke Takahashi. 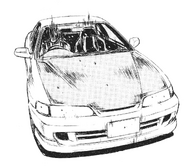 Smiley Sakai's Integra Type R as it appears in the manga

Smiley Sakai's Integra Type R in Arcade Stage 8 Infinity, as seen from behind to show the car's rear bumper having no under spoilers

Retrieved from "https://initiald.fandom.com/wiki/Honda_Integra?oldid=24285"
Community content is available under CC-BY-SA unless otherwise noted.