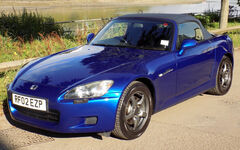 Honda S2000 is a roadster that was manufactured by the Japanese automaker Honda Motor Company. It was launched in April 1999 and was created to celebrate the company's 50th anniversary. The car was first shown as a concept at the Tokyo Motor Show in 1995, following which it was launched in world markets in 1999. The S2000 is named for its engine displacement of 2 liters, carrying on in the tradition of the S500, S600, and S800 roadsters of the 1960s. Several revisions were made throughout the car's lifetime, including changes to the engine, gearbox, suspension and interior and exterior. Officially two variants exist: the initial launch model was given the chassis code AP1, while the AP2 designation was given to vehicles produced from mid-2003 onwards. Production of the S2000 ceased in June 2009. In Japan, it was exclusive to Japanese dealership sales channels called Honda Verno.

Dr. Toshiya Joshima of Purple Shadow, known by the name of God Hand due to using one hand on the steering wheel, drives a blue modified Honda S2000 during his race against Takumi Fujiwara. During the race, Takumi felt like he was being chased by Bunta in the Subaru Impreza. This is when Toshiya sprang his trap by doing a gutter-jump and taking the lead. Although Takumi recovered and took the lead, Joshima used the time attack line to pull away. This results in Takumi breaking suspension in the AE86, unable to catch up to Toshiya. Due to exhaustion, however, Toshiya was forced to make a vomit stop, conceding the victory to Takumi. He would later use the S2000 once more to give Takumi a ride so he can see his special one-hand driving technique.

Toshiya Joshima's S2000 as seen in the Fourth Stage

Ditto, as viewed from behind to show the single muffler

Retrieved from "https://initiald.fandom.com/wiki/Honda_S2000?oldid=24006"
Community content is available under CC-BY-SA unless otherwise noted.