Itsuki Takeuchi (武内 樹 Takeuchi Itsuki, known as Iggy in the Tokyopop version) is Takumi's best friend and a member of the Akina SpeedStars.

He provides the comic relief in the series, and is generally quite loud and obnoxious. Itsuki works part-time at a gas station with Takumi and Iketani; Itsuki plans to use the money he earns to buy an AE86 Corolla Levin (to complement Takumi's AE86 Trueno) but mistakenly buys an inferior (less power, poor brakes, less chassis bracing, and looser suspension) AE85. This upsets him until Takumi takes him for a drive (ultimately racing it downhill), demonstrating that the driver's skill can make a difference. With a car, he is a self-proclaimed member of the Akina SpeedStars. Unlike Kenji and Iketani, Itsuki is the most optimistic and excitable "member" of the SpeedStars. He eventually purchases a turbocharger for his Eight-Five. Self-proclaimed "Lonely Driver".

Likes: Taiwanese bananas, cheesecake, all cars popular among street racers and horsepower, cute girls in miniskirts, his AE85, AE86 (both Trueno and Levin).

His first love interest, in the anime, whom Natsuki introduced him to. While driving her home, Shingo starts an impromptu battle with Itsuki (thinking it is Akina's Eight-Six) which resulted to a crash. Although Saori wasn't badly hurt, she dumps him due to bad memories.

His first (second in the anime) love interest. At first, she mistook Itsuki as a vandal when he was flirting with her older brother's Eight-Six Levin. The following day, she took a liking after covering her the coin shortage in the taiyaki stand. She also taught Itsuki how to drift and found it easier to learn from her whereas he finds learning from Takumi difficult. As she parts to Saitama with her brother, Itsuki became heartbroken. He eventually saw her again during Project D's battle against Sakamoto. Kazumi eventually dumped him, leaving Itsuki disheartened.

Not much is known about them. They were first seen in Takumi's childhood chapter, where he first meets Itsuki. They are very friendly. It is later on known that his father owns a diesel sedan, which Itsuki very much dislikes.

Takumi was his best friend since middle school as well as his workmate in the gas station. After discovering he is Akina's fastest, he envies his driving skills and bought an Eight-Six, which, upon closer inspection, is actually an Eight-Five. After feeling embarrassed and humiliated by the rest of the SpeedStars members, Itsuki gained inspiration after Takumi drove his car in an impromptu downhill battle and would practice driving to one day follow his footsteps. He is a caring friend to Takumi who is with him whenever anything significant happens to him.

Itsuki respects Keisuke and Ryosuke Takahashi for being the fastest racers of Akagi and one of the best in the whole of Gunma. He first met them when the RedSuns arrived at Akina to to confront to SpeedStars about their battle to them.

He is his workmate at the gas station as well as a friend whom joined his team the Akina SpeedStars after Takumi demonstrated his driving skills on his Eight-Five. Him and Itsuki often forms a group called 'lonely drivers' after they both got broke up by their girlfriends and became single,

Kenji is another SpeedStars member and occasionally comes to the gas station to talk about cars, races and other stufffs. Him and Itsuki are friends, much like he is to Iketani. Itsuki respects him as a senior and a better driver, despite occasionally making fun of him for being single.

He first met Nakazato in his gas station when Nakazato wanted to fix the battle between him and Akina's AE86. Itsuki was the only SpeedStars 'member' there, so he agreed on the battle. He later realized Takumi was not interested and was scared and traumatized on the promise he fixed. He nearly went to apologize Nakazato on the time of their battle, only to be cut short by Takumi actually arriving there to battle him.

In the manga, he met Shingo on a meeting with SpeedStars on Akina when he came to confront Takumi to a battle. In the anime, he first met Shingo in an impromptu battle while he was returning Saori to her house. Shingo bumps Itsuki's car, causing him to crash and to be hospitalized, though escaped with minor injuries. Takumi, to avenge Itsuki agrees to battle Shingo that day.

Itsuki first met him when he along with Takumi went to Lake Akina when Kyoichi and Seiji was commenting about Akina's fastest racers. He first disbelieved Itsuki when he said an AE86 was the fastest car in the Akina, but was shocked to find out it was the truth when Ryosuke later confirms to him that he was beaten by an AE86 itself.

Seiji was also there with Kyoichi when they first met Itsuki and Takumi. He made fun of Itsuki when he said the fastest car in Akina was an AE86. But was surprised when Kyoichi later confirmed from Ryosuke it was the truth. He still didn't believe it until he raced the AE86 himself.

He is the brother Kazumi, Itsuki's first girlfriend (in the manga). Itsuki liked Wataru's Levin AE86 when he first saw it. Later on in the Saitama arc when he meets Kazumi and dates her, Wataru pulls up in his car with Kazumi's 'former' boyfriend who wanted to be with her again. Despite doing this, he feels bad for Itsuki and later on tells Takumi to tell Itsuki he should find a better girl than his sister.

A classmate in one of his classes as well as a good friend. He adores her good looks but always gets envious whenever she is together with Takumi.

Yuichi is the owner of the Esso Gas Station, which makes him Itsuki's boss. He is very helpful and caring towards his employees. He also sometimes gives facts and informations about cars and driving techniques. He was the first one to realize Itsuki's new car was not an AE86, but instead an AE85. He occassionally spectates some battles with the SpeedStars. 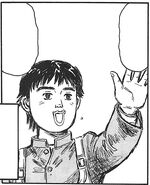 Itsuki along with Takumi on their way to school 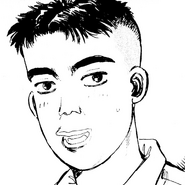 Itsuki in the manga 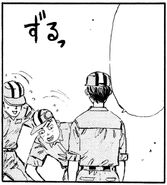 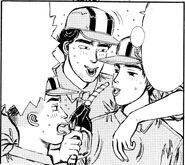 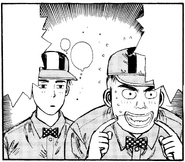 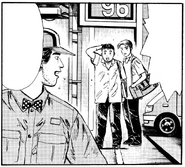 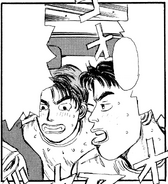 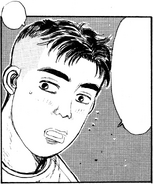 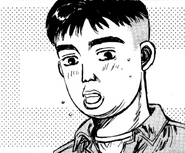 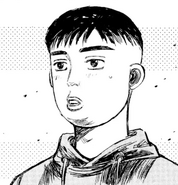 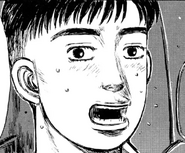 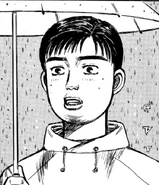 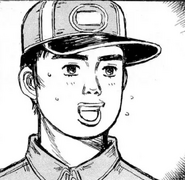 Itsuki and Takumi at their very first scenes 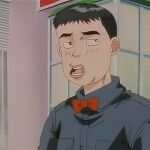 Itsuki in front of Takumi's Eight-Six

Itsuki with his new car

Itsuki in Second Stage after he confronts with the Emperor team

Him in school uniform

Itsuki meets Kazumi while he looks at Wataru's Levin

Act.2, Itsuki with Iketani and Kenji

Itsuki and Takumi at school

At the gas station with Takumi

Itsuki celebrating after hearing Takumi's victory against Kai at Irohazaka 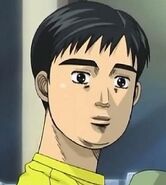 Itsuki waving inside his AE85

Itsuki and Kazumi in Fourth Stage

Itsuki crying when Kazumi dumped him

Itsuki at the gas station

Itsuki and Takumi in Final Stage

Itsuki and Takumi in school uniform

Itsuki along with Takumi and Natsuki

Itsuki holding the magazine about the Takahashi brothers

Itsuki crying to hope Takumi reaches in time for the battle

Itsuki in front of Takumi's Eight-Six

Takumi driving his AE85 with Itsuki at the impromptu battle

Later on after the battle 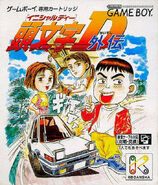 Itsuki on the cover of Initial D Gaiden 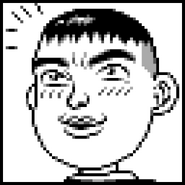 One of Itsuki's sprites from Initial D Gaiden 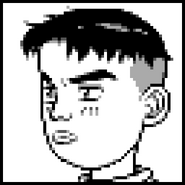 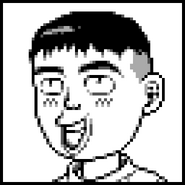 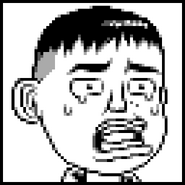 Itsuki on a poster for Initial D Arcade Stage

Takumi and Itsuki in an Arcade Stage 4 loading screen 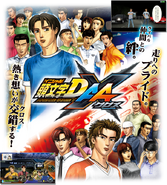 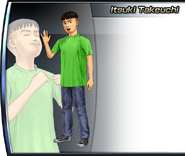 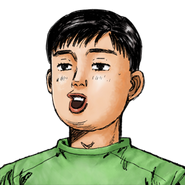 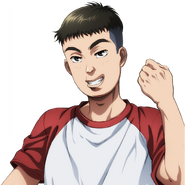 Itsuki in Arcade Stage Zero, based on his design in the Legends Trilogy 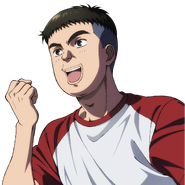 Itsuki in a "Big Bonus" Cutscene in Initial D Pachislot