Kazumi's Ex-Boyfriend (和美の元彼, Kazumi no Motokare) is an unnamed salaryman who used to date Kazumi Akiyama. His name is not revealed in any form of media.

At some point, he met Kazumi Akiyama and the two started dating. The two of them had an intimate relationship. A month prior to Project D's second battle with the Northern Saitama Alliance, they broke up. Despite this, he kept trying to contact Kazumi, even though she would decline his calls.

Around a month after they broke up, he shows up on Kazumi's doorstep, and runs into her brother Wataru. He explains to Wataru that he just wants to talk to her one last time, because if he doesn't he'll always regret it. Wataru calls Kazumi and tells her what's going on, and Kazumi tells Wataru to get rid of him. Wataru drives him to the convinience store where Kazumi is talking with Itsuki Takeuchi. Wataru forces Kazumi to talk with her ex, and he admits that he still loves her, much to her shock. He explains that he couldn't commit before because he felt unworthy of her as he is just a salaryman, alongside their age difference. He continues, asking Kazumi to forgive him. Kazumi turns to talk to Itsuki, who tells her to follow her heart, but much to his shock she runs into her exes arms. The two of them leave, leaving Itsuki heartbroken.

He dated Kazumi for an unspecified amount of time, before breaking it off because he felt unworthy of her love. He eventually changes his mind and asks for her forgiveness, and the two of them get back together. 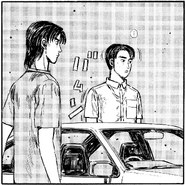 His face now properly revealed in the manga

He speaks with Kazumi 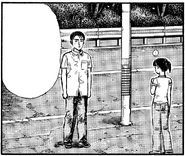 Him and Wataru in his Levin arriving to Kazumi

Kazumi falls for him