Originally part of a bōsōzoku gang, Keisuke Takahashi left that life behind to join his brother Ryosuke's racing team: the Akagi RedSuns. The RedSuns proved themselves as the fastest team on Akagi, aiming to become the fastest racers in all of Gunma, and later, the whole of the Kanto plain. Keisuke became the second fastest racer of the RedSuns with his his RX-7 FD3S, only being beat by his brother and his RX-7 FC3S. During an expedition to Mt. Akina, the RedSuns challenge the local team, the Akina SpeedStars, to a battle. Ryosuke notes that even though the SpeedStars have some decent racers, even some of the worse racers in the RedSuns would be able to beat them. Despite this, Ryosuke wishes for Keisuke to race, as he would easily be able to set a record that the locals will be unable to beat for years.

Deciding to head home to Akagi, Keisuke is confronted on his way down Akina by a Panda coloured AE86. The two engage in an impromptu battle with the Eight-Six performing a perfect Inertia Drift, shocking Keisuke and causing him to spin out. Keisuke vows revenge against the Eight-Six, spending the days up until the battle with the SpeedStars searching for the car on Akina. Keisuke talks to Koichiro Iketani at the gas station he works at, asking him to pass on a challenge to the "phantom Eight-Six".

On the night of the SpeedStars battle, Keisuke is originally set up to go against Kenji, due to Iketani being injured, however this race is delayed due to a traffic car heading up the mountain. This car is revealed to be the Eight-Six that had beaten Keisuke, driven byTakumi Fujiwara, and not his father Bunta, like Iketani had previously believed. The race begins, and even though the Eight-Six is technically inferior to the FD, it manages to keep up with him throughout the whole course, falling behind on the straightaways but catching up again in the corners. Keisuke is then overtaken by Takumi when he performs a gutter run in the 5 consecutive hairpins near the end of the course. With Keisuke embarrassed and the RedSuns plans halted, Ryosuke plans to battle the Eight-Six himself in order to reclaim their honor.

Before the battle between Ryosuke and Takumi, Keisuke enters an impromptu battle with Takeshi Nakazato of the Myogi NightKids on Akina. The two of them decide to have a rematch when the RedSuns head to Myogi. Weeks later, after Ryosuke's defeat against Takumi, the RedSuns make their way out to Myogi for the battle. Nakazato manages to maintain his lead throughout the race, however, through a combination of Nakazato's R32 losing grip in its tires and the rain that had began halfway into the race, Keisuke was able to overtake.

Keisuke faced Seiji Iwaki of Emperor on Akagi, although this battle is not shown, Akagi's course record was shattered. Keisuke later faced solo racer Wataru Akiyama on Akagi, initially turning Wataru away, he is forced to defend himself after he initiates an impromptu battle. After the battle ends early due to a crashed car in the road, the two vow to race each other again in the future.

After the dissolution of the RedSuns by Ryosuke, Keisuke joins his new team, Project D, as one of its "Double Aces" alongside Takumi Fujiwara. One of the first teams they go up against is the Momiji Line based team Seven Star Leaf, with Keisuke being put up against Atsuro Kawai. Although Kawai had more power on the straightaways, Keisuke's superior cornering lead to him gaining the lead and winning. Project D had set course records for both the uphill and downhill of the Momiji Line.

Project D's next opponents were the students of the Todo School, with Keisuke being put up against Smiley Sakai. Sakai starts the battle in the lead, maintaining his lead for a majority of the race, amazing Keisuke and onlookers with his speed and skills. In a corner, Sakai makes a false brake, causing Keisuke to lift his foot from the pedal and making his turbo lag. Attempting to get revenge for Sakai's trick, Keisuke speeds up, following Sakai into a corner at suicidal speed. Half-spinning out, Keisuke manages to right his car, determined to get Sakai. Keisuke manages to come side by side with Sakai in the fourth hairpin, managing to squeeze ahead in the next turn and winning him the battle.

On Sadamine, Keisuke went up against Kyoko Iwase, a member of the Northern Saitama Alliance with a crush on him, although this is mostly unreciprocated. Keisuke manages to keep up with Kyoko for most of the race, before realizing that Kyoko's FD was equipped with a Single Turbine, which meant that she was more prone to turbo lag. After bumping Kyoko and causing her to lose boost, Keisuke manages to come side by side with Kyoko, overtaking from the outside mid-corner. A few days later, Kyoko journeys out to Akagi, finding Keisuke in the middle of a practice run, with Keisuke explaining that he finds her presence distracting, and that he wouldn't be able to perform at his best with her there.

The Alliance asks for a second set of battles at the Enna Skyline, with Keisuke being put up against Wataru Akiyama, allowing the pair to finally have their rematch. Their battle takes place in the rain, and lasts for two laps, with Wataru's car slipping out after touching a drain cover while adjusting his windscreen wipers.

Project D then travel to Tsuchisaka, to battle a group of Lan Evo drivers with bets on Project D losing. Wanting to get their money by any means, including playing dirty. The Evo drivers get a group to put a large amount of oil onto the road, causing Keisuke to lose control of his car and collide with a guardrail. Determined to race even if he has to use his broken car, Keisuke has Tomiguchi tape up the damaged parts of his car and heads off to a practice run, however he spins out in a corner. Accepting that his car isn't race-worthy, Keisuke is relieved when Kyoko shows up in her car, with her agreeing for him to use it in the race.

With his car fixed and fitted with a new body kit, Keisuke's next battle would be against Kozo Hoshino of Purple Shadow. Their race was half uphill and half downhill, with Hoshino having the advantage on the way up and Keisuke on the way down. Keisuke stays behind on the first round, maintaining a few second delay behind Hoshino and catching up during the downhill. Keisuke starts in the lead on the second run, maintaining his lead until the turnaround point, when the two cars try to turn at the same time, with Keisuke being forced to dodge Hoshino, giving him the lead. Hoshino begins drifting through the downhill to maintain his speed, as his tires started losing their grip. Taking advantage of Hoshino's loss in grip, Keisuke overtakes, triumphantly crossing the finish line in first place.

A little while after the races in Ibaraki, a group of Project D impostors surfaced in Saitama. Keisuke, along with Takumi, Wataru and Fumihiro, confronts the impostors, publicly calling them out.

After his race with Hoshino, Keisuke requested that Tomiguchi give his FD the ability to dash whenever needed, though this would come at a cost of control, as his FD would now very easily spin out.

The first team Project D went up against in their Kanagawa campaign was Team 246, with Keisuke battling Kobayakawa. Keisuke starts the race in the leading position, and maintains his tires through the first half until the less steep second half. Keisuke dashes around a corner into a low visibility section, shocking Kobayakawa. Kobayakawa struggles to keep up with Keisuke and eventually falls seven seconds behind.

Project D would then go against Katagiri Street Version, with Keisuke being put up against Hideo Minagawa. Keisuke takes the lead in the battle, maintaining his lead for most of the race through good footwork. Early into the second half of the race, Keisuke performs a brake feint, widening the gap between the two cars. The two drivers start going at full throttle, with both racers losing most of their grip. After tapping Keisuke's bumper near the finish, Minagawa slows down, signaling defeat due to his destroyed tires.

Up next was Team Spiral, with Keisuke battling against their leader, Ryuji Ikeda. Ikeda takes the lead at the beginning, maintaining the lead until they reach a wall of fog. With help from Kenta, who is waiting on the fog to call if the road is clear ahead, Keisuke is able to go full throttle, overtaking Ikeda and winning the race.

Project D's final battle would be against Sidewinder, with Keisuke racing against their leader, Go Hojo. Hojo takes the lead. Keisuke manages to keep up with Go throughout the first round. Keisuke takes the lead in the second round. Despite several attempts to lose Go, he manages to keep up with Keisuke. Go tries to lessen the gap between the two of them, however he loses traction and spins out, allowing Keisuke to win.

Exclusively in Final Stage, Keisuke is shown as a professional racer with his FD.

The car is a 1991 Mazda ɛ̃fini RX-7 Type R, chassis code FD3S. It is painted in Competition Yellow Mica.

After being damaged prior to Project D's battle with the Tsuchisaka Lan Evo Team, Keisuke's FD was upgraded.

The FD in Chapter 337, after crashing into a guardrail

The FD in Chapter 340, covered in tape

The FD in Chapter 615, Spec. V
Add a photo to this gallery

Volume 44
Add a photo to this gallery

The FD in Second Stage

The FD in Third Stage

The FD in Battle Stage

The FD in Fourth Stage

The FD in Fifth Stage

The FD in a Fifth Stage Eyecatch

The FD in Fifth Stage, upgraded
Add a photo to this gallery

The FD in the Legend Trilogy

Keisuke's FD in a magazine
Add a photo to this gallery

The FD in Initial D for the PlayStation

The FD in the opening of Extreme Stage

The Spec I FD in Arcade Stage 8 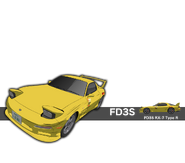 The FD, as seen on the promotional website for Legend 2

A Remote Control model of the FD made by Kyosho

Retrieved from "https://initiald.fandom.com/wiki/Keisuke_Takahashi%27s_Mazda_RX-7?oldid=30250"
Community content is available under CC-BY-SA unless otherwise noted.