After couple of years of not racing against his undefeatable opponent. He was told by his son that Kai witnessed a similar AE86 drifting aside from his car. Kai thought that it was supposed to be Bunta passing by. However, when the secret was revealed, Bunta lied to him that Takumi was actually delivering with his AE86 even though it wasn't Takumi after all. Ken then scheduled the race between his son and Takumi and told Kai to use his special technique to tackle against corners more efficiently. His son didn't manage to win although he followed his father's orders. 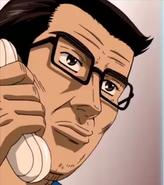