Kenta Nakamura (中村 賢太 or 中村ケンタ Nakamura Kenta, known as Kent in the Tokyopop version and the English version of Arcade Stage 4, and Danny in the English versions of Arcade Stage 2 and 3) is one of the youngest members of the Akagi RedSuns and the third best driver of the team. Kenta absolutely adores Keisuke Takahashi and is always eager to prove himself to Keisuke. Kenta was recognized by Keisuke himself for his driving skills, and has been somewhat taken under his wing. Kenta specializes in rain conditions, because he had a habit of practicing in the rain since the wet roads wouldn't wear his tires down as much.

He is also shown to be a scout for the RedSuns as shown in Second Stage when he was able to scout the Eight-Six during the time the engine was swapped and was able to inform the Rotary Brothers about the Shomaru battle between the two Eight-Sixes.

In the First Stage, he arrogantly challenged Takumi Fujiwara to a wet race and lost. This was the time when Takumi used Itsuki as ballast, simulating a load of tofu. (Note that Takumi delivers tofu everyday, even if it rains).

In Second Stage, after Wataru has a confrontation with him and Keisuke, Wataru decides to have an impromptu battle with Keisuke, to which Kenta tries his best to follow both of them, but loses them.

In Fourth Stage, he drives the #2 van for Project D and mostly does the recon recording of courses before the team actually travels to the locations, but it's unknown if he uses his S14 for it. Before he joined the Akagi RedSuns he purposely waited for rainy days to practice drifting.

In Fifth Stage, Kenta assisted Keisuke helping him pass Team Spiral’s Ryuji Ikeda in the start of a foggy high speed section near the end.

In MF Ghost, Kenta is the Real Estate Department Chief of TK Mach Corporation along with Keisuke as the CEO.

LIKES: Orange, his S14, Keisuke, and the rain 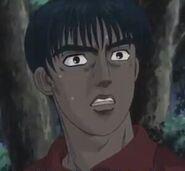 Kenta battling against Takumi in a flashback 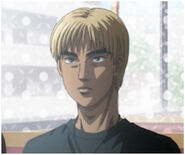 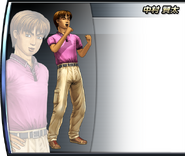 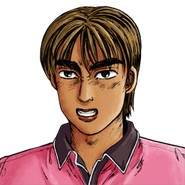 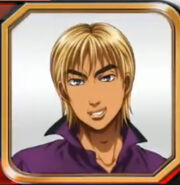 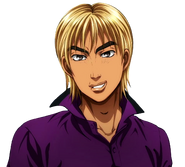