Koichiro Iketani's Nissan Silvia K's (S13) (owned by Itsuki Tachibana in the Live Action film) (nicknamed Sylvia by Iketani, and also known simply as the Silvia, or S13) is the first Nissan Silvia shown in the series.

During a shift at his job, Koichiro Iketani invites Itsuki Takeuchi and Takumi Fujiwara up to Mt. Akina to meet his team, the Akina SpeedStars. As the two don't have a car he offers them a lift in his S13, exciting Itsuki. Iketani's driving scares Takumi, with him screaming up most of the mountain. The Akagi RedSuns arrive and challenge Iketani and the SpeedStars to a battle in a weeks time. The two teams go on a practice run, with the SpeedStars getting thrashed by the RedSuns. After being told by his boss, Yuichi Tachibana, that the fastest racer on Akina runs a tofu store, Iketani searches around, eventually finding the one tofu store in the area with a Toyota AE86 parked outside. Doubting that such a car could be the fastest on Akina, Iketani is surprised to see Takumi outside, realising quickly that this is where he lives. Iketani offers him a lift to work, with Iketani asking him if he really knows nothing about cars. In preparation for the battle, Iketani replaces his tires with new Dunlop Formula RSVs, and changes his brake pads. Iketani makes another stop at the Fujiwara Tofu Store, asking its owner, Bunta Fujiwara, to race on behalf of his team. During a practice run, Iketani loses control while dodging an oncoming car, crashing the S13 into a guardrail.

After Takumi's debut against Keisuke Takahashi of the RedSuns and his following battle against Takeshi Nakazato of the Myogi NightKids, the S13 is finally repaired. Kenji and Itsuki go up to Akina with Iketani, where he practices weight shifting. He then heads down the mountain to practice his drifting, where he enters an impromptu battle with Shingo Shoji of the NightKids, who taps him with his car, causing his S13 to spin out. The next night, Iketani asks Takumi to drive his S13 down the mountain, so that he can see his technique. Back on top of the mountain, Takumi enters a duct tape deathmatch against Shingo, with Iketani following a little while behind, just in case one of them crashes and needs help.

After Takumi's battle with Ryosuke Takahashi, the leader of the Akagi RedSuns, Iketani meets Mako Sato, whose car had broken down. Iketani and Mako go on a date in S13, with the two of them talking about cars and racing. After his date, Iketani goes to Usui Pass with Kenji, Itsuki and Takumi to check out their top racer, a SilEighty driven by two women. As they go to leave, Iketani spins out, causing the SilEighty to stop, and revealing to Iketani that its driver is actually Mako. Mako and Iketani meet up at Lake Akina, with Mako apologising for not telling him sooner, and telling him that she wants to race against Akina's Eight-Six. Iketani leaves and begins racing down the mountain in an emotional state. Takumi agrees to race with Mako and wins, much to everyone's surprise. Mako tells Iketani to meet her at the kamameshi billboard where they first met, however Iketani originally doesn't want to attend, believing that she is in love with Ryosuke Takahashi. After getting a stern talking to by Yuichi, Iketani rushes to the billboard, missing Mako by mere minutes.

When Team Emperor come to Akina, Iketani rushes to the Fujiwara Tofu Store to tell Takumi. Had Takumi been defeated by Emperor, Iketani would have been the next up to battle. Iketani later travels to Irohazaka with Kenji to watch Takumi's battle against Kai Kogashiwa.

Shortly after Project D's battles against Seven Star Leaf, Iketani encounters Mako whilst on a trip with his mother. Iketani and Mako agree to meet up again by the kamameshi billboard where they first met. Not wishing to make the same mistake twice, Iketani arrives at the billboard early, however leaves again to give an old man a lift to his hotel. Iketani's car breaks down on the way back, meaning that he has to call Mako so he can get a lift. Mako tells him of her desire to be a professional racer, and even though Iketani wants to tell her how he feels about her, he decides against it, so as to not dissuade her from following her dream.

After Itsuki fits his Eight-Five with a Turbocharger, Iketani goes up to Akina with him, Takumi and Kenji. While up on the mountain, they are challenged to a race by two circuit drivers from Tokyo. Iketani races the two of them, being easily beaten, however Takumi manages to overtake the two racers easily in Itsuki's Eight-Five.

Itsuki Tachibana drives an S13 as leader of the Akina SpeedStars. He crashes this car during his race against Takeshi Nakazato of the Myogi NightKids. After Takumi Fujiwara's debut in his battle against Nakazato, Itsuki replaces his S13 with a Toyota AE86.

The S13 is equipped with a CA18DET. This engine is Turbocharged and has a displacement of 1809cc. The S13 revved at 6400rpm and Iketani had his S13 tuned so that it could produce 200HP. 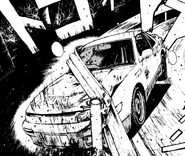 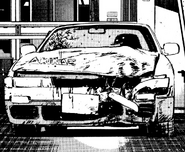 The S13 in Chapter 007, damaged
Add a photo to this gallery

The S13 in Second Stage

The S13 in Extra Stage

The S13 in Third Stage

The S13 in Fourth Stage

The S13 in Fifth Stage
Add a photo to this gallery

The S13 in the Legend Trilogy

Ditto, damaged
Add a photo to this gallery

The S13 in the Live Action film

Ditto, after crashing
Add a photo to this gallery

The S13 in Initial D for the PlayStation

Ditto, in-game
Add a photo to this gallery

Retrieved from "https://initiald.fandom.com/wiki/Koichiro_Iketani%27s_Nissan_Silvia?oldid=25105"
Community content is available under CC-BY-SA unless otherwise noted.