"If someone's got a bit of money and doesn't know anything about cars, he'll drive a Benz or Ferrari or some crap. I've got money, but I couldn't care less about those sorts of cars! Till the day I die.. give me a GT-R!"
―Kozo 'God Foot' Hoshino

He is known by the name of "God Foot" due to his extraordinary acceleration control and his ability to drift the BNR34 with the ATTESA E-TS 4WD system activated, which is considered almost impossible. He shouts exclamations, kiais, and grunts during a race in order to keep himself from over concentrating. If he becomes silent and concentrates too hard, he will drive without braking, which would cause him to crash. He races Keisuke Takahashi in a full lap (combination of uphill and downhill) battle, demonstrating his sense of fairness, as the FD3S would have no chance against the GT-R Nür uphill. He prefers the GT-R over other cars such as Ferraris and Lamborghinis, saying he could easily afford them but couldn't care less. Also, he states that he'll drive the GT-R till death, as the R32 had left an indelible impression on him when he drove it for the first time.

He has owned a total of 4 GT-Rs: an R32, an R33 in which he was disappointed with, another R32, and finally his current car, the R34 that he uses in the race against Project D. He displays incredible control of his accelerator and brake pedals, but his heavier car is chased down by Keisuke's lighter FD3S in the first run although it barely remains ahead of the FD. The second run displays Hoshino's cunning as he overtakes Keisuke on the uphill/downhill pylon, though his heavier GT-R begins losing traction. Keisuke's doggedness inspires Hoshino to initiate a drift battle which makes his tires suffer even more. Near the goal line, Hoshino drifts too far because of his tires, allowing Keisuke to attempt to pass him on the outside. Although Hoshino's weaker tires made him bump Keisuke slightly, the FD pulled out in front and finished the second round in the lead. Hoshino conceded the match as his traction was now not enough to win another run.

After his race with Keisuke, he offers to introduce him to his professional racing contacts. Keisuke refuses the offer, as he has unfinished business he wishes to take care of first (beating Takumi Fujiwara). Although he lost, his time attack record still remains unbeaten, even by Keisuke no matter how hard he tried, due the the fact that his previous R32 that Kozo used had around ¥10,000,000 invested in it, effectively making it a circuit time attack car.

He and Joshima watch Project D's final battles with Sidewinder at the Tsubaki Line in Kanagawa prefecture.

Kozo Hoshino driving inside his R34 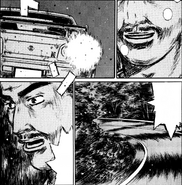 During the cone U turn overtake

Turning around in the first U turn while shouting

During the cone U turn overtake against Keisuke

Kozo drifting with Keiuske in the final corners