Kyoichi Sudo (須藤 京一 Sudō Kyōichi, also known as Kyle in the Tokyopop version and Kyochi in the Latin Spanish Dub) is the leader of Emperor. Like the rest of the team, he drives a Mitsubishi Lancer Evolution. He has a long time rivalry with Ryosuke Takahashi.

He is also a graduate of the Todo School. Unlike other students however, he doesn't drive a Honda, and uses no Spoon parts on his car.

An old acquaintance of Ryosuke Takahashi of the Akagi RedSuns, Kyoichi is much like Ryosuke: he is a calm and composed driver, compared to his teammate Seiji Iwaki. Eager to show Ryosuke that he and his team are the best, ever since his defeat to Ryosuke some years ago back when Ryosuke was known as the 'White Comet of Akagi', Kyoichi and the Emperor team goes on to beat the various teams of Gunma, including the Thunder Fire (Exclusively in the anime) and the NightKids. He believes in the ultimate superiority of his race circuit techniques, whilst Ryosuke holds that street racing has its own special requirements. His home course is one-way, so he is unable to fully attack blind corners on two way roads, supporting Ryosuke's view. After Seiji's defeat against Takumi Fujiwara in their battle at Akina, resulting in Emperor's Gunma sweep streak to come to a halt, Kyoichi vows to battle Takumi before planning to defeat Ryosuke. Hence he is also often considered the first driver to have beaten Takumi Fujiwara, when Takumi blew out his engine at Akagi due to Kyoichi gapping him after a corner and pulling away from him, which lead to Takumi to overrev his engine and blowing it up. However Kyoichi states he didn't count it as a real race as he was demonstrating the difference in power before racing Ryosuke. After hearing Takumi's loss, Ryosuke agrees to battle Kyoichi and during the battle, when Kyoichi takes the lead, Ryosuke exploits Kyoichi's one small, yet fatal weakness - his fear of (particular) right turns. As Kyoichi practices on racing circuits and his home turf, which is Irohazaka mountain pass which is single lane, Kyoichi didn't have to face the probability of oncoming traffic cars. but Ryosuke took advantage of it, trapping Kyoichi in a right turn corner, and overtaking him on the next corner. Kyoichi accepts his defeat and his mistakes in his racing theory.

After Takumi gets the new engine, he goes to Irohazaka for a rematch against Kyoichi Sudo. Kyoichi as usual, gives Takumi the head start for having a weaker powered car, while at the same time noticing the changes Takumi made with his newer engine. Kyoichi tries his counterattack at the third bridge, where he usually overtakes most of his opponents. However Takumi forces him to a position that he did not give up his position and they both arrived parallel at the bridge, which caused Kyoichi to forfeit from counterattacking. It should be noted however, that the result should normally be considered a tie at best, and the race itself did not last more than one round. Kyoichi declared Takumi as the winner for merely being able to resist being overtaken at the last part of the course where other drivers fell prey to him. To Kyoichi, who takes pride in his ability to win, a tie at his home turf is equivalent to a loss.

Later on Kai Kogashiwa, a lone racer who earlier defeated Seiji, battled Takumi at Irohazaka. Kyoichi and others spectated the battle unfold and when Takumi won, he realized Takumi would be someone more greater and more skilled than Ryosuke.

Exclusively in the anime, he spectated Takumi's rematch against Ryosuke at Akagi with Seiji, commenting on their driving skills.

As mentioned earlier, Kyoichi was a student at Todo school. So when Project D faces off against Todo at Tochigi, Kyoichi and Seiji visits the area to spectate the battle. After Project D's initial win against Todo, Kyoichi warns Ryosuke about Tomoyuki Tachi, a top student of the school and a pro racer who will face off against Project D on behalf of Todo. Ryosuke plans carefully about this and despite others thinking Ryosuke would choose Keisuke and his FD3S to face off against Tomoyuki and The Todo School's Honda Civic, Ryosuke choses Takumi, which surprised nearly everyone. Even Kyoichi wondered why Ryosuke chose Takumi. After Takumi uses 'Blind Attack', a technique he came up on his own under pressure, Kyoichi understood why Ryosuke chose Takumi, as even though Keisuke would be good at uphill, Takumi's driving skills on the downhill would make them win the match.

As Project D reached their final battles at Kanagawa prefecture, Kyoichi Sudo and Seiji, along with many other racing teams Project D faced earlier on and others visited Kanagawa to spectate Project D's final battles. During Takumi's battle against Shinji, Kyoichi comments on the difference between Takumi's and Shinji's driving techniques, especially on their corner entries, and compares it with his AWD Evo corner entry at Irohazaka slopes. After Takumi wins the final battle, Kyoichi and every other team congratulates Takumi for the win.

He is his best driver in his team as well as co-founder of Team Emperor. In his races, he instructs him to follow his instructions precisely, not to succumb to impatience and not to take their opponents lightly. A failure to obey these would result in a slap as he disobeyed Simulation 3 when he lost against Takumi in Akina.

Ryosuke is his biggest rival. During their first race in Akagi, he lost to him and argues about their different racing theories. He was told if his theory is superior then he can rematch him. This caused him to form Team Emperor and crushed every team in Gunma (except the SpeedStars whom Takumi raced in their place, Akagi RedSuns and Impact Blue) to prove their superiority. After conquering much of Gunma, he rematches him again the year after his first race with him. He lost the rematch due to being told his weakness is turning right due to fear of oncoming traffic in which proven that Ryosuke was right about circuit racing theories aren't enough for mountain racing as he is used to circuit racing which has no oncoming traffic and his home course Irohazaka is a one way road. Kyoichi then realises this and believes his delusions resulted to defeat. He ended his rivalry as he lets him spectate Takumi's battle with Kai Kogashiwa and both share their theories with how the race would result to.

Although he looked down on his car, he nonetheless admired his driving skills and adaptability. He is the first one to ever defeat Takumi during his race in Akagi which resulted with blowing his engine. Although he didn't count it as a real race from the beginning, he lectured him to get a proper car to compete in a racing environment. However, he was defeated in a rematch as he failed to perform a counterattack on the last corner of the bridge on his home turf. He praised his new Eight-Six after his defeat. After Takumi's victory against Kai Kogashiwa, Kyoichi seen so much potential in him and states he can surpass his rival Ryosuke Takahashi.

Both him and Tomoyuki went to the same racing school in Todo Juku. He spectated his race against Project D with Seiji Iwaki at Happogahara. 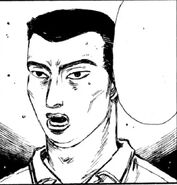 Kyoichi in the past

Kyoichi Sudo and other Emperors in manga 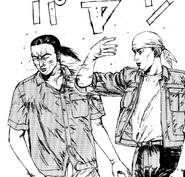 Kyoichi slaps Seiji for disobeying his order and losing the battle 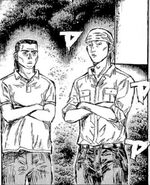 Koyichi battles against Ryosuke in his flashback

Kyoichi slaps Seiji for disobeying his order and losing the battle

Him battling against Takumi

Kyoichi and Seiji spectates Takumi's rematch with Ryosuke at Akagi

Kyoichi and Seiji spectating the battle 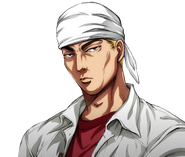