Kyoko Iwase (岩瀬 恭子 Iwase Kyōko, known as Kylie in the Tokyopop version) is a member of the Northern Saitama Alliance who was originally the fastest in the alliance. She drives a black Mazda FD3S RX7, almost similar to the one of Keisuke's, except for some tuning differences. She is the only person who is shown having Keisuke Takahashi. She is the only female opponent Project D faced, as well as the only female opponent that Keisuke raced and second female racer overall in the series after Impact Blue.

Kyoko was talking to her friend at a hotel, when she told her that if she gets a 'boyfriend', he needs to have a better car than her. Later on, Keisuke Takahashi and Fumihiro comes to the place in his FD to 'scout' the area. Kyoko, who left earlier, returned there to find her missing cellphone. Keisuke who earlier noticed it, asks her if she was looking for her phone, which he points out to her. Upon on seeing him and his car, Kyoko began to form a crush on him.

Later on that night, she was surprised to hear that the Project D was coming to their area to practice and battle. She was even more surprised to see the same FD3S she saw earlier that morning and on seeing Keisuke, she was completely perplexed, as she was in love with her opponent. This creates a conflict of interest between defeating Project D and supporting her love. Love prevailed. When she was practicing on the touge for the battle that night, her car broke down in the middle. Keisuke who was passing her on the same way offered her car to be repaired by his team, which he does so. During their battle, Kyoko wanted Keisuke to concentrate on her as she was on the lead, never wanting the battle to end. Keisuke admired her driving skills while he was chasing her, stating her to be really fast. But as expected, Keisuke ends the battle by noticing her car's weakness, which was that her single turbine tuned FD is more peaky in power output as well as in turbo lag. Keisuke nudges her car a little, causing Kyoko at adjust her throttle, resulting in losing her turbo boost. Keisuke then overtakes her from the outside on the next corner.

After this, Kyoko tries to spectate Keisuke's battle with Wataru Akiyama, and even tried to meet him in Akagi, but then he wanted to point out that he was not interested on her, making Kyoko leave crying. Although Kesiuke regretted his actions, he felt as if he had no other choice.

Attesting to this, Kyoko later lent her FD to Keisuke, after he damaged the front axle and suspension of his own FD in an accident during a trial run on Tsuchisaka caused by the Lan Evo team when they spilled oil on a corner. Keisuke decided to use her car for the race, instead of the loaned FC Ryosuke planned for him to use (as Keisuke broke the rule on car borrowing). Even though Keisuke initially struggled to adapt with a completely different car, he got used to it and he won the battle easily.

Later on, Keisuke takes Kyoko on a date in his brother's FC3S as for a reward on lending her car to him. After going to Hotel to have food and taking her back to mount Akagi, Keisuke reveals his past to her, about how he was a reckless thug and had connections with the biker gang and how he got interest in cars. Unfortunately for her, Keisuke turns her down, choosing to focus on his own goals and Project D, to the exclusion of all romantic relationships. Exclusively in the anime, it was seen Keisuke driving her downhill at Akagi at extreme speeds, on the final request of Kyoko to experience his driving skills while she broke down on realizing he won't be able to be with her afterwards as Keisuke raced downhill.

After this, Kyoko was never seen again.

Kyoko Iwase in the manga 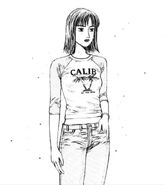 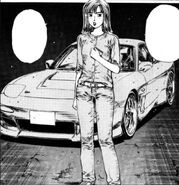 Kyoko with her FD RX-7

On a Volume cover

Kyoko with her RX-7 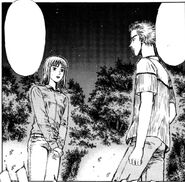 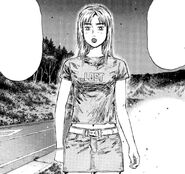 Kyoko devastated on learning Keisuke doesn't want to be with her 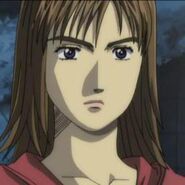 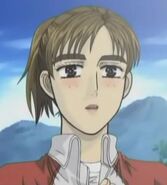 Kyoko Iwase standing and supporting Keisuke for his race

On a date with Keisuke 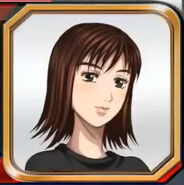 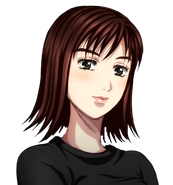