Masashi Suzuki (鈴木 政志 Suzuki Masashi) is a mechanic with an incredible list of connections that enables Bunta Fujiwara to get even the most outrageous car parts from him, including the engine that he and Bunta installed in the AE86: a TRD tuned Group A Silvertop 20V 4A-GE from an AE101 race car, a replacement for the Trueno's original 4A-GE engine after Takumi blows it in a run against Kyoichi Sudo. After handing down the Trueno to Takumi, Masashi was entrusted by Bunta to find him a "suitable" car for him, and as a result he finds him the GC8V (Coupe) Subaru Impreza WRX STi Version V.

Masashi and Bunta during the change of new engine on AE86.

Yuichi and Masashi during the battle of AE86 and EVO IV. 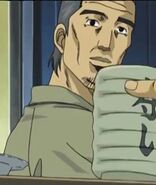 Masashi in the Fourth Stage.