Mika was raised up by an unnamed father and taught golf at an early age. Very little is known about her past life beyond there. When she meets Takumi Fujiwara, Mika is a senior in high school and is, at this point, exceptionally talented at playing golf. Her father raised her to play golf early in life the same way that Bunta raised Takumi to drive early in his life. She tells Takumi that she aspires to become a professional golf player later on in life.

When the Fake Takumi blows off her best friend Tomoko, she gets angry and decides to confront Takumi about it (not knowing it wasn't the real Takumi that did it). She takes the train out to Yuichi Tachibana's Gas Station and asks to see Takumi; when he arrives, she slaps him hard in the face. Bewildered to why she did this, Mika tells her story to Takumi and his friends. They in turn ask Mika to send a photo of Takumi via cell phone to her friend to confirm if the real Takumi was the guy that blew her off. She comes to find out from her friend that the real Takumi had nothing to do with it. A day later after exposing the impersonators, Takumi receives a phone call from Mika (whom found out his number from the gasoline stand whom then gives her his mobile number) that morning to apologize. Takumi drives out to Saitama (where she lives) to see her. She apologizes in person for her previous actions and they talk for several hours. After exposing the impostors, the Fake Takumi apologizes to Mika's friend. Mika thanks Takumi and they continue to see each other as the story progresses.

Takumi Fujiwara and Mika ended up seeing each other frequently as the series progressed from Fifth Stage onwards, and began dating soon afterwards. Mika began teaching Takumi some golf, and he began taking her out in his car to different areas soon after. After their first date at the beach, she preferred Takumi to just call her by her name normally without any honorifics in which he agrees to do.

After the conclusion of Initial D, nothing is known about Mika's & Takumi's relationship. In the 3rd round of the MFG races it is said that Takumi married a golfer from Saitama, and they both moved to England. It is implied that this is Mika. 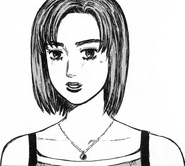 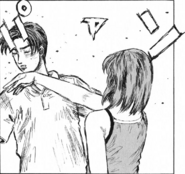 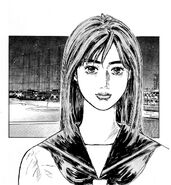 Mika in on the cover of Volume 35

Mika Uehara at the beach 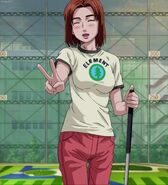