Natsuki Mogi (茂木 なつき Mogi Natsuki, known as Natalie in the Tokyopop version) is Takumi Fujiwara's initial love interest, and one of the few characters who does not get scared when riding in a car being driven by Takumi. She is known to have been with at least three males in the series: Miki, "Papa", and Takumi.

Natsuki, before falling in love with Takumi Fujiwara, engaged in enjo kōsai (known as compensated dating), with an older man nicknamed "Papa". It is unknown for how long she did this. It was also revealed that she had also hooked up with Miki, Takumi's classmate, and has had sexual contact with him before. After all of this, she befriended Takumi Fujiwara and started to get to know him. She quickly fell in love with him, and began doubting her relationship with Papa. The two quickly began dating soon after, and in one notable scene the two kissed in Takumi's AE86 Trueno.

Soon afterwards, Natsuki felt the urge to break off her relationship with her Papa and pursue a relationship with Takumi. However, he began receiving letters behind her back about her, detailing on how she is dating an older man driving a white Mercedes. She invited her Papa to a small family restaurant in the night, and formally broke her relationship off with him. Takumi, watching from his car in the parking lot, witnessed the two exit the restaurant and both enter a white Mercedes. Enraged, Takumi cuts contact with Mogi and begins avoiding her.

Mogi attempts to solve the problem with Takumi, asking if she had done something wrong. He replies with, "Good luck with the Benz guy," to her shock. She later contacts him and clears up the misunderstanding, and decides to remain friends. She later organises a surprise party at his house on Christmas with Bunta Fujiwara, much to his shock, and they have a small party.

A few days later, she is reunited with Miki and he kidnaps her, driving her to the top of Mt. Akina. She briefly notifies Takumi of her kidnapping, and he pursues Miki in his car up and down the mountain. Miki crashes his car on the downhill, and Natsuki rushes out to Takumi's car. He proposes to drive her home, and she explains what happened.

During the drive, Natsuki decides that she will be attending a university in Tokyo to try and free herself from her past, to which Takumi agrees. They both break up for the final time at the end of Third Stage as they go their separate ways on a high note. In a flashback sequence in Fourth Stage, Natsuki tells Takumi they'll meet again someday. Takumi even begins to think about her when he's driving the AE86 to overcome his "AWD Complex". Despite this, Mika Uehara becomes Takumi's new girlfriend during the latter half of Fifth Stage. 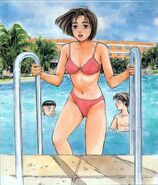 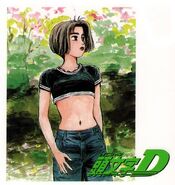 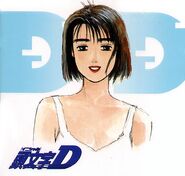 Natsuki in the manga 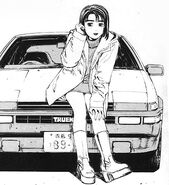 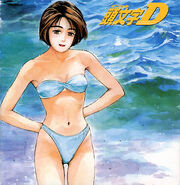 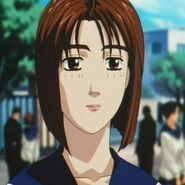 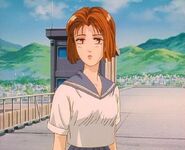 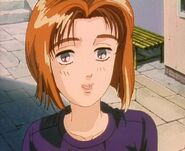 Natsuki in 5th stage
Add a photo to this gallery

Retrieved from "https://initiald.fandom.com/wiki/Natsuki_Mogi?oldid=25612"
Community content is available under CC-BY-SA unless otherwise noted.