Pachislot Initial D is an Pachislot game based on the Initial D series. It combines slot machine gameplay with footage of battles from the series. It was announced on October 14th 2020 and released in January 2021. A mobile version of the game was released in February 2021.

Footage used in the game is modified footage from the Legends trilogy, with new footage in the same style. All vehicles have been visually changed (although they are still recognisable as the cars they represent), likely due to the car manufacturers not wanting their names associated with a slot machine or due to licensing issues. 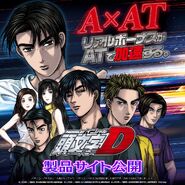 A Poster for the game