Beyond the Impact Blue

Kyoichi Sudo asked him and Satake just to look around Usui, but Satake wanted to race Impact Blue. Ren disagreed, saying that Kyoichi just asked them look around, but he later concluded that a little race would not hurt. Ren gave in to Satake and expected an easy victory. However he later drove up to the C-121 corner of the Usui pass to find Satake crashed after hitting a guardrail. Satake was unhurt, but told Ren not to tell Kyoichi about this battle. 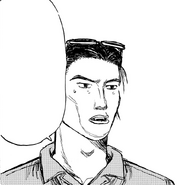