Rin Hojo (北条 凛, Hōjō Rin) is the infamous Grim Reaper (死神 Shinigami) of Kanagawa and Go Hojo's elder brother. He was feared for his dangerous racing skill and at the time was engaged to a girl named Kaori, however, the conflict between them including Kaori's affair with Ryosuke Takahashi made her commit suicide. The death of Kaori led to Rin disappearing from the racing scene, resenting Ryosuke and isolating himself for a few years to mourn Kaori. His abrupt disappearance turned him into a legend within the Kanagawa scene.

After years of seclusion, Rin briefly and unofficially returned to the racing scene, with his intent to go after Ryosuke on the anniversary of Kaori's death, making his comeback by ambushing Ryuji Ikeda of Team Spiral during a practice trial. After the race between Project D and Team Spiral, he finally met Ryosuke after years and both raced to the death on the Hakone Turnpike, with Ryuji Ikeda, who had to settle a score with Rin, spectating behind. After failing multiple times to run Ryosuke off the road, Rin tried one last effort to do it again near the end of the race, however, the combination of Ryosuke and Ikeda's cars stopping his R32 and the spiritual presence of Kaori prevented him from doing so. After the race, both he and Ryosuke finally settled their differences and put their past behind them and not forgetting about Kaori.

Finally at peace with himself, he renounced the nickname he had become known for and appeared at Project D's final race against Go's team Sidewinder, reconciling with his younger brother and giving him cryptic advice before watching the races alongside with Ikeda.

Rin Hojo with his R32 GTR

"Things are getting a bit too flashy..." 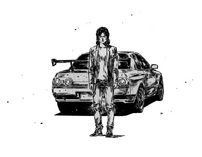