Kazuya Nakai
Ryuji Ikeda (池田 竜次 Ikeda Ryuji) is the leader of Team Spiral and referred to as Zero. Ikeda's family staff a temple - moreover, his father is the temple's head priest and as a result has ample funds to finance his racing career.

Ikeda is an older racer and is very calm and level headed even in the heat of a race. He prepares for races by zoning out. Ikeda believes in a theory he created known as "Zero Theory" in which car and driver come together to become a single entity. To do so, a great deal of tuning has to be done to a car in order to match the characteristics of the driver to attain a higher level of racing.

When asked by Junichi Sakamoto, the number 2 driver of Team Spiral, what he thinks about when zoning out, Ikeda replies with "I don't think about anything. It's how I empty my mind and focus."

During the race with Project D, he remains in a confident position until he reaches a section of the track where it had been fogged over. This makes Ikeda hesitate, which goes against his zero theory.

Keisuke Takahashi, with assistance from Kenta Nakamura, passes Ikeda at the start of a higher speed section near the end.

After being defeated by Project D, he spectates the race between Ryosuke Takahashi and Rin Hojo, and helps Takahashi in his attempt to stop the Grim Reaper's GT-R from crashing into toll posts, when his brakes and tires got dangerously worn out.

During the Sidewinder's and Project D's battle, he and Rin can be seen talking about the last advice the former Grim Reaper had given to Go, his younger brother.

He makes a return in MF Ghost as a special guest for a race commentary starting in chapter 63. It is mentioned that he is now the director of the Zero Theory School, as well as the municipal representative of his own city district, working both to better Motorsports, and to introduce district policies to improve teenage health and well-being.

He is also stated to help out by acting as head of the family temple on occasion.

Ikeda inside his 350Z 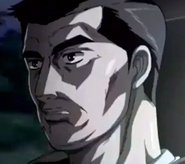 Ryuji after he was about to crash 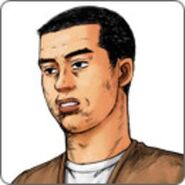 Retrieved from "https://initiald.fandom.com/wiki/Ryuji_Ikeda?oldid=32402"
Community content is available under CC-BY-SA unless otherwise noted.