Hiroki Tochi
Satoshi Omiya (大宮 智史 Ōmiya Satoshi) is Team 246's leader and downhill representative who drives a 2nd generation Mazda Roadster. After seeing Kobayakawa's defeat, he decides to lead in the downhill planning to take the same approach as Keisuke. During the race, he also holds back until he sees an opening to go all out against Takumi. When he finally did so, his superior braking technique began to show. While miraculously keeping up, Takumi is distraught to see that he loses in terms of braking technique.

The race becomes so intense that while a rear wing would normally be considered purely cosmetic in the touge, Eiji Kubo of team Sidewinder notes that at the speed that both cars is enough to let aerodynamics be a possible deciding factor in the race. Trying to find any method of speeding up, Takumi turns his headlights off to reduce the Eight-Six's coefficient of drag. Omiya, after deciding earlier on not to look back and turns his rear-view mirror away, does not notice the eight-six disappearing and so, would negate the usual effect of the blind attack. However, when approaching a corner, Takumi decides to turn on his headlights again. Seeing that the road ahead was suddenly lit up, Omiya is led to believe that there is an oncoming car and brakes early while leaving the outside lane open. Takumi jumps in to go side-by-side, but Omiya refuses to budge and maintains the inside. However, because the line was so tight, the Roadster's wing collided with a road sign, leaving it hanging on the car, unbalancing its aerodynamics.

Ryosuke mentions how Mazda's FR layout cars are naturally inclined to oversteer because their rear ends are always uniquely higher than the front, making the rear very light. He notes that while the FD makes good use of these dynamics, the Roadster suffers from excessive oversteer and that an imbalance to the car would be Takumi's best opening. This manifests itself after Omiya retakes the lead but due to the aerodynamic imbalance because of the broken wing, his car oversteers the last corner and spins out, losing the race.

Omiya inside his Roadster

Omiya in the manga 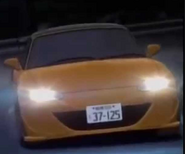 Omiya's aura
Add a photo to this gallery

Retrieved from "https://initiald.fandom.com/wiki/Satoshi_Omiya?oldid=32464"
Community content is available under CC-BY-SA unless otherwise noted.