Sayuki (沙雪, known as Simone in the Tokyopop version) is the navigator for Impact Blue. She acts as a co-pilot for Mako Sato, and works with her in her battle against Takumi Fujiwara in First Stage.

Extremely little is known about her past life, even her surname is not revealed in the manga nor the anime. What is known is that she met and befriended Mako Sato earlier on in life, and developed a love and passion for cars and racing. It is unknown when, but eventually, the two tackle Usui pass, their home course, with Sayuki as the navigator, and Mako as the primary driver. She technically does not own a car, but says that the Nissan SilEighty that she and Mako drive in is shared between them both.

Eventually, the two challenge Takumi Fujiwara, Akina's new downhill ace at the time, to a race on Usui pass. The two lose after Mako enters one of the corners too fast, and is told to spin out by Sayuki as they were unable to recover. Takumi swiftly avoids them and prevents an accident.

After the race, Sayuki invites Takumi and his friends, Itsuki Takeuchi, Koichiro Iketani and Kenji to a pool party, and slowly develops a crush on Takumi, not hesitating to hide it; calling him cute and loveable. She also teases Mako and Iketani, who both have feelings for each other, though a misunderstanding kept them both apart. Further on in the series, Sayuki, along with Mako, attends Takumi's final race against Sidewinder's Shinji Inui, whom she says is extremely similar to Takumi in many ways.

Sayuki is a cheerful, outgoing girl always looking for good looking men. She's extremely flirtatious and loves to tease men and Mako herself, and also develops a small crush on Takumi Fujiwara after her and Mako's race against him. As Mako's navigator/co-driver, she is responsible for necessary callouts that may inform Mako of something important; for example, obstacles in the course, oncoming traffic, specific braking zones, etc. Notably in the race against Takumi, she instructed Mako to spin out after she entered a corner too quickly and sharply, preventing them to recover safely.

Sayuki and Mako are known as one of the best duo combinations in the Gunma area, and the best on Usui, only being beaten once by Akina's Eight Six. 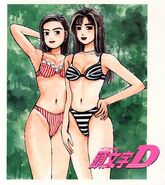 Mako and Sayuki dressed in Bikinis 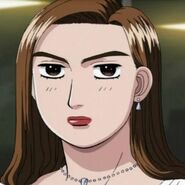 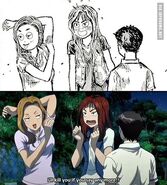 Mako is mad at Sayuki, as seen in the manga and the anime.

Sayuki as shown in First Stage

Sayuki at the pool with Takumi: First Stage 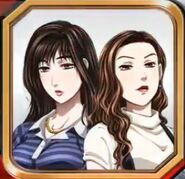 Retrieved from "https://initiald.fandom.com/wiki/Sayuki?oldid=32121"
Community content is available under CC-BY-SA unless otherwise noted.