Shibukawa (渋川市 Shibukawa-shi, also called S-City in the series) is a city located in the extreme northwest of the Kantō Plain, in the center of landlocked Gunma, Japan. Encompassing the juncture of the Tone River and Agatsuma River, it is about 120 km from Tokyo. Due to its location at the geographical center of the nation, Shibukawa is known as the Bellybutton of Japan (日本のおへそ, nihon no oheso).

Shibukawa originally grew to prosperity as an inn town, but even today is in a central location between Numata and Maebashi. Also, anyone going to a number of famous hot spring resorts, such as Kusatsu, Shima, or Ikaho must pass through Shibukawa.

In Initial D, both the Fujiwara Tofu Store and the Esso Gas Station are located in Shibukawa.

In 2020, as part of Initial D's 25th Anniversary, Shibukawa celebrated its relationship with Initial D in the Initial D x Shibukawa event. Several Initial D themed manholes were fitted around Shibukawa, several buses had the Fujiwara Tofu Shop logo printed onto them, a digital stamp rally was held, postcards were given out, Initial D stamp collections were sold, and a "collaboration accommodation plan" was offered with coasters featuring the same designs as the manholes available to those taking advantage of the plan. 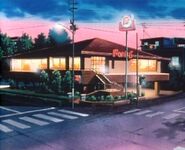 Retrieved from "https://initiald.fandom.com/wiki/Shibukawa?oldid=28349"
Community content is available under CC-BY-SA unless otherwise noted.