The Downhill Specialist (Called by himself)

Shingo Shoji (庄司 慎吾 Shōji Shingo) is a member of the Myogi NightKids who drives a red Honda Civic SiR-II (EG6). Shingo races dangerously, he will nudge his rival's car in order to make the other driver lose control if he's unsure about his own chances of winning. He doesn't find plain downhill races any fun, preferring to race against a handicap. In this handicap match, Shingo tapes his right hand to the steering wheel for the duration of the race. By doing this, Shingo limits his own steering capabilities. In terms of racing ability, Shingo is the best driver on the Night Kids team. He is also a childhood friend of Impact Blue's navigator, Sayuki.

Shingo actually shares many beliefs with Takeshi Nakazato, but whenever they watch other battles, they try to stay away from one another so that people won't mistake them as friends even though in Extra Stage, they acted like buddies. There were also times that he supported his teammate for the Night Kids' sake, like the battle against Seiji Iwaki and his Evo IV.

Wanting to prove himself to fellow Night Kids member Takeshi Nakazato, who had recently been defeated by Takumi Fujiwara, Shingo Shoji first appears bumping Koichiro Iketani's Nissan Silvia K's causing it to spin out in order to challenge Takumi to a race. Later, (in an anime exclusive battle), Shingo later crashes Itsuki Takeuchi's Toyota AE85, who was just transporting Saori home, which resulted in Itsuki getting sent to the hospital.

Takumi Fujiwara decided to accept Shingo's challenge to avenge Itsuki's injury. Prior to the race, Iketani demanded Shingo an apology for the incident, which agreed on if he lost to Takumi. During the race, Shingo had an initial advantage over Takumi, but the latter took the lead when he decided to steer less and drift without getting out of line. Annoyed by Takumi's proficiency, Shingo bumped him, retaking the lead. However, Takumi regains full control despite his panicked state and drives in reckless fury, aware that Shingo did it on purpose. Shingo, realizing that Takumi was catching up on him, believed that he was trying to bump him as revenge. Takumi then was able to take the lead once more, but as the race comes to a close, Shingo decides to end the race in a tie by crashing on the AE86. However, Takumi dodges Shingo's attack, forcing him to crash on the guardrail.

After crashing, Shingo gets out of the crippled Civic and inspects the damage that occurred when he crashed. Witnessing two vehicles coming at him (four vehicles in the Legends Trilogy), Shingo then admits defeat as Iketani and Kenji helped him. They then offer Shingo a ride to the hospital, but he refused but still insisted on taking him after learning his lesson. 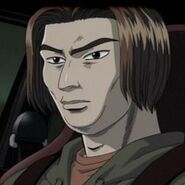 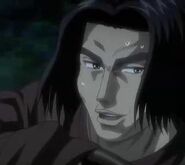 Shingo's car from the manga. 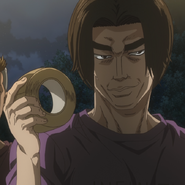 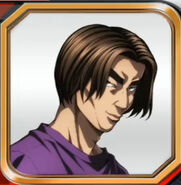 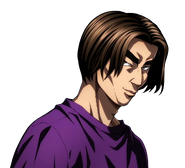 Shingo in Arcade Stage Zero
Add a photo to this gallery

Retrieved from "https://initiald.fandom.com/wiki/Shingo_Shoji?oldid=32339"
Community content is available under CC-BY-SA unless otherwise noted.