Atsushi Abe
Shinji Inui (乾 信司 Inui Shinji) is the final opponent of Project D's Takumi Fujiwara in the Final Stage as a member of Sidewinder. Shinji is a young man, even younger than Takumi and seems very intelligent. He drives a Toyota Sprinter Trueno 2door which belonged to his late father. He is the fourth character in the series to drive a Toyota AE86.

Very little is known about Shinji's past life. He had an unnamed father who used to partake in rally racing with a notch-back Toyota AE86 Trueno, who died due to unknown circumstances. His mother instead took care of him when he was younger, and he often sat in the passenger seat when she was driving through the Tsubaki Line. From this, he developed a major understanding of the course. Later in life, Shinji expressed concern for his mother when she was driving, as she was often tired and stressed, making it hard for her to drive safely. He offered to drive for her, and taught himself how to, developing a very smooth driving style in order to keep his mother relaxed while he was driving.

Shinji was later recognized by Sidewinder and Team Spiral and praised for his driving abilities and skills, notably defeating Team's Spiral's main drivers both on the time attack and race. With this, Sidewinder took him in to prepare against the final battle against Project D. Shinji is known as Takumi Fujiwara's final opponent, facing off against him in the downhill at the Tsubaki Line.

In Final Stage, Shinji shocks Takumi with his smooth driving skills and approach of each corner, often pulling away at each one, which had never happened to Takumi before. This is reminiscent of Takumi's first proper race, where he and Keisuke Takahashi have a race on Mt. Akina; and Takumi, despite having an inferior car, still catches up to Keisuke's FD3S. At the end of the race, Takumi surprises Shinji with a blind attack, switching on his headlights at the final corner, only to discover that he is revving at over 12,000 rpm, surpassing his engine's rev limit. Because of this, Takumi's engine blows, sending him into a spin, with Shinji following suit. However, Takumi instinctively presses down on the clutch to regain his tires' grip, having his car roll to the finish line still in the lead. Shinji, lacking dogfight experience, spins a full 360 degrees and loses momentum, and crosses the finish line after Takumi.

The race winner is disputed, as technically Takumi's engine had blown, means he lost; a quote said by Kyoichi Sudo after the AE86's engine had blown for the first time. However, he still crossed the finish line in first position, meaning that Shinji had lost.

Shinji later apologized to his mother and his superiors, Go Hojo and Eiji Kubo, for losing the race; however neither of them were angry, and Go said that Shinji at least gave it his all. 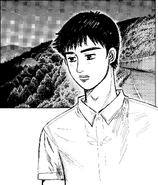 Shinji in the manga

Shinji as shown in Fifth Stage