Shiraishi (白石 Shiraishi) is Natsuki Mogi's classmate. She was the one who revealed to Takumi Fujiwara that Natsuki was engaged in an Enjo-Kosai relationship with an old man in a Mercedes-Benz. It is later revealed that the man is her father. She is a Manga-only character, and has never appeared in the anime, she does however make an appearance as a cameo role in the Legends trilogy.

She wears glasses and has black hair tied in pigtails. She has a crush on Takumi, and gives him chocolate on the last Valentine's day before they graduate.

Takumi overheard Shiraishi's voice from before. 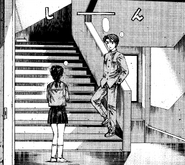