Anthony Bowling
Smiley Sakai (スマイリー 酒井, Sumairī Sakai), or just simply Sakai (酒井, Sakai) is a student of the Todo School and one of Daiki's friends and drives an Integra Type R DC2, equipped with an aftermarket turbocharger. Sakai races against Keisuke Takahashi of Project D in a hillclimb battle.

He uses two techniques to race, first, using high speeds to enter a corner to get the other person to do the same, then correcting his speed during the turn. The other trick is to feint brake his opponent, forcing them to back off while he speeds away. His face tenses up when he is racing to make him look like he is smiling, hence his nickname, Smiley Sakai.

Judging by the way that Daiki refers to him with the honorific san (Sakai-san), it can be inferred that Smiley is a senior student of the Todo School, and probably the reason why he knows much of Todo's experiences in racing, especially the school's rivalry with Purple Shadow and their top racers.

Smiley in the manga

Smiley with Daiki and Tomoyuki in Chapter 676

Smiley along with Daiki and Tomoyuki in Final Stage 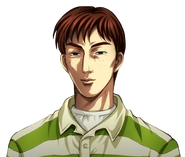