Takumi Fujiwara (藤原拓海 Fujiwara Takumi, known as Tak in the Tokyopop version) is the main protagonist of Initial D, and a member of Project D. He is the driver of a Toyota Sprinter AE86 Trueno GT Apex or simply the Eight-Six, originally belonging to his father Bunta. He is also the delivery boy of his father's tofu business, doing deliveries in the morning at Mount Akina.

Despite seemingly not having knowledge of cars, not even knowing that his car was called an Eight-Six, Takumi is a very skilled driver, having driven on Akina since he was in junior high. He made himself known by overtaking Keisuke Takahashi while making a delivery run, which eventually caught the attention of the Akagi RedSuns, the Myogi NightKids and other racers around the Gunma prefecture.

In his up and coming emergence, he raced against Keisuke Takahashi himself, Myogi NightKids members Takeshi Nakazato and Shingo Shoji, the female racing duo Impact Blue, Kenta Nakamura and finally Ryosuke Takahashi, in which he ended Ryosuke's winning streak. At the same time he was dating Natsuki Mogi, though their relationship became strained after he found out about Natsuki engaging in compensated dating with an older man.

His winning streak supposedly came to an end when his car engine blew during a race against Kyoichi Sudo, the leader of Team Emperor at Mount Akagi. Kyoichi stated that he didn't consider the match a race and just wanted to prove to Takumi that the Eight-Six is not powerful enough against his Evo III. The Eight-Six was later fixed by Bunta, with a new engine and a few upgrades but some parts to balance the Eight-Six and the engine were withheld by him until later. With the Eight-Six now fixed, he went up against Wataru Akiyama, a racer from the Saitama region and a fellow Eight-Six driver.

After having a rematch with Kyoichi and racing against Kai Kogashiwa and making amends with Natsuki before going in their separate ways, he joined Ryosuke's new team Project D (which had a similar goal of his previous team the RedSuns). As the downhill driver of Project D, his skills massively improved, racing against tougher opponents from different regions. He also met his second girlfriend Mika Uehara, a golfer, whom he met when Mike mistook him for the person who supposedly broke up with her friend, though she later apologized and eventually they both began dating.

His final race within Project D was against Sidewinder member Shinji Inui, and though he won, it left the Eight-Six's engine destroyed. Since then, Takumi drove Bunta's Subaru Impreza, continuing to race on Mount Akina while also planning on becoming a professional racer.

At the beginning of the series, Takumi worked as a part-time gas boy with Itsuki Takeuchi, along with Koichiro Iketani, who is a member of the local racing team, the Akina Speed Stars. In the first few episodes both Itsuki and Iketani think that Takumi has no driving ability, due to his apparent disinterest in cars and racing.

However, the owner of the gas station and an old friend of Takumi's father, Yuichi Tachibana, began to suspect that Takumi has advanced driving techniques; during a work break in which Takumi and his friends were watching a drift race on TV, the group began to discuss drifting techniques.

Though Itsuki was quick to point out what he thought were Takumi's apparent "mistakes" in understanding, Yuichi understood that even though Takumi was unable to come up with the technical terms required to demonstrate a common base of understanding, his hand motions were suspiciously indicative of an experienced driver, if not a racer. Until the race against Keisuke Takahashi, it had remained speculation on his part.

In fact and unbeknownst to most people, Takumi has had far more experience on the touge than Iketani and Itsuki, as he has been driving his father, Bunta Fujiwara's, AE86 Trueno for five years (since he was 12 in his first year of junior high school, 7th grade), delivering tofu to a hotel at 4:00 A.M. every day. Takumi has been manipulated subtly by Bunta into developing driving skills, without being fully aware of his intent.

Takumi's driving technique makes him the second best racer in Akina, the other being his father; the very fact that he has managed to win races against far more powerful cars with his AE86 Trueno is testament to his driving skills early on in his touge racing career.

As a result of five years of experience on Akina - chief of which Bunta's paper cup training comes to mind - Takumi is able to quickly adapt to nearly any situation that presents itself during a race. One of his greatest strengths is his ability to visualise the road in his head, thus making up for the lack of visibility no matter how dark the mountain pass may be. This only takes effect if he has driven on the road before, which was not the case in some of his later races.

He is considered an instinctive, rather than an intellectual driver, as Ryosuke Takahashi might be. The mizo-otoshi technique - a difficult "gutter-run" technique involving driving his AE86's inside tires into rain gutters to defeat centripetal force, arguably defines Takumi, as the use of the technique led him to many victories throughout the story, especially during the initial stages of his racing career.

At first, Takumi was not part of any team - he was just loosely affiliated with the Akina Speed Stars and had only helped during his first race at his father's behest - but, later on, was convinced by Ryosuke Takahashi to join Project D, a special team created by Ryosuke aimed at breaking every course record in Japan.

Takumi often appears docile and weak-minded, but he is stubborn and strong-willed, and many remarks have been said about that by both friend and foe alike. Yuichi realized that Takumi was like his father in his behavior. Because he is not as outwardly ill-tempered as Keisuke Takahashi, the mechanics of Project D tend to find him docile. However, to those who have raced against him, Takumi possesses tremendous concentration and instinctive insight once behind the wheel (and these qualities are most evident when he is chasing after his opponent). His apparent docility became mental traps for many of his opponents. Keisuke asks Takumi to become professional racers together and they become rivals that aspire to this same dream.

As he faces on with his last match against the strongest driver of Sidewinder, Shinji Inui, and his last match as a driver of Project D, his car engine blows a last time, leading till both cars spinning out as Shinji follows suit. With the tires of Takumi's 86 locking up, it sent it into a spin. Shinji had no choice but to follow. At this moment, with the experience gained from the engine blow in Akagi when going against the Evo III, Takumi instinctively presses on the clutch, freeing up the tires and regained control of the 86 momentarily. However, Takumi was going in reverse with inertia alone. Shinji, on the other hand, lacked actual dogfight experience and didn't know what to do, spinning a full 360 degree, causing him to lose more momentum than Takumi did. Takumi won by crossing the finish line backwards with his 86. Shinji's 86 ended up facing the finish line after the 360 spin. It is debated who actually won; normally a blow engine automatically means defeat, but since he crossed the finish line first and Shinji admitting defeat to his mother and teammates, it means that he won. Takumi then decides to keep his AE86, choosing to repair it over time (in the manga, he decides to get rid of it).

Takumi is currently dating Mika Uehara, a golfer who is training to a professional.

Takumi left Japan for the UK, when he was 20 years old, to participate in the British National Rally Championship. He may be weak on gravel, but he excels on Tarmac. Takumi was known to dramatically overspeed to the point where he catches some air on some races. On his third year, during a test run, his driveshaft malfunctions, causing him to crash. The crash caused Takumi to retire from competitive racing, but he still stood close to the sport. He was now a teacher and mentor, who would eventually teach Kanata Rivington, leading to the main events of MF Ghost. 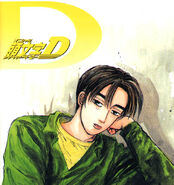 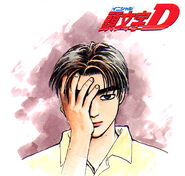 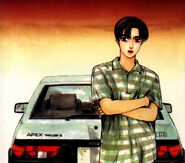 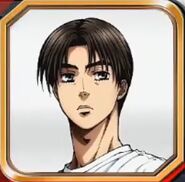 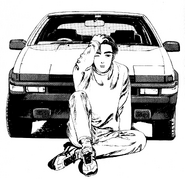 Takumi in the cover of the first volume of the manga.
Add a photo to this gallery 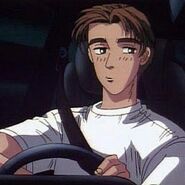 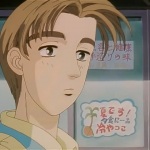 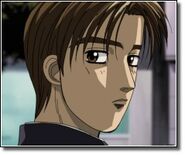 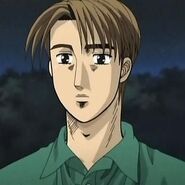 Takumi during his race against God Arm Joshima

Appearance in the 2013 reveal trailer.

Retrieved from "https://initiald.fandom.com/wiki/Takumi_Fujiwara?oldid=26109"
Community content is available under CC-BY-SA unless otherwise noted.