Not much is known about team Thunder Fire and where their home course is. Their symbol is a lightning bolt with the word Thunder Fire written within it.

Thunder Fire makes their first appearance in Act 11 of First Stage. There are 3 guys who make fun of Itsuki's Toyota AE85 on top of Akina pass. They drive a Grey/Silver Nissan 180 and Black/Dark Blue Nissan S13. After they leave, Takumi gets furious and chases them down the mountain with Itsuki's car.

Thunder Fire was the first team that was defeated by Team Emperor in the beginning of Second Stage. A purple 180SX driven by one of the members was beaten by Seiji Iwaki's Evo IV, and tore their team sticker in half and stuck upside down on the spoiler. The same car also hit the guardrail midway in Second Stage, which halted the unofficial race between Keisuke and Wataru. Thunder Fire's prominent team members and skill level are unknown, but like the Akina SpeedStars, Thunder Fire may be just a group of friends who race in their leisure time with little knowledge on proper technique.

Team Thunder Fire is an anime-exclusive team, and therefore are not part of the manga series.

The Thunder Fire cars seen in second stage in act 1 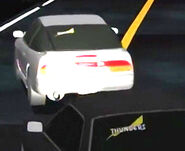 The two S13 guys with the AE85 behind them

The AE85 overtaking the S13 guys

The S13 guys after getting overtaken

The 180SX getting overtaken

Him after being overtaken

Them after the battle

Them talking about how spooky the AE85 is
Add a photo to this gallery
Retrieved from "https://initiald.fandom.com/wiki/Thunder_Fire?oldid=31363"
Community content is available under CC-BY-SA unless otherwise noted.