Tomoyuki Tachi (舘 智幸 Tachi Tomoyuki, known as Touch in the English localisation of the Arcade Stage games) is a professional racer and a graduate, or "old boy" (shortened to OB) of the Todo School.

He was brought in to have a rematch against Project D on Happogahara, after they were defeated by them. Tomoyuki took Daiki Ninomiya's EK9 (in the anime he uses the Todo School's EK9) and beat Takumi Fujiwara's downhill record in one try, without pushing the car to the limit. Tomoyuki agreed to use the school's top car, the Spoon-tuned demonstration EK9, at Happogahara.

Tomoyuki tuned the Civic the best he could to be able to compete with the FD on the straights, but surprisingly, Ryosuke decided to send out the Eight-Six. He lost the race to Takumi when he steered off the centre of the road to avoid hitting a cat that crossed the street near the finish line. Because of this dodging he creates enough space for Takumi to pass him in his Eight-Six. Afterwards, Takumi asks Tomoyuki why he suddenly created space for Takumi to pass. Tachi responded that he thought he saw something cross the road and because of his racing reflexes immediately dodged it. Takumi's headlights were turned off as part of his technique. After the battle he praises Takumi for winning the battle, explaining that luck was on his side'. Afterwards Tomoyuki tells Todo that found out what he was trying to show him for bringing into the battle.

Later on him along with Daiki and Smiley is seen at Kanagawa prefecture, spectating Project D's final battle against the Sidewinder.

Tomoyuki when first introduced in Chapter 235

Tomoyuki with his racing suit 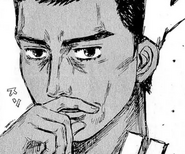 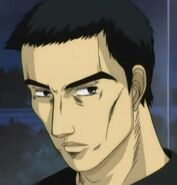 Tomoyuki in a professional driving suit

Tomoyuki along with Daiki and Smiley Sakai 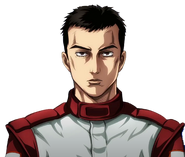