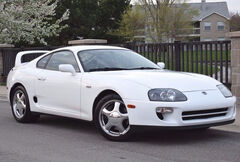 Toyota Supra is a sports car/grand tourer that was produced by Toyota Motor Company. The original models were in production from 1979 to 2002, and new generation models entered production in 2019.

The styling of the Toyota Supra was derived from the Toyota Celica, but it was both longer and wider.

Starting in mid-1986, the Supra (in its third generation, Mark III) became its own model and was no longer based on the Celica. In turn, Toyota also stopped using the prefix Celica and began just calling the car Supra, Owing to the similarity and past of the Celica's name, it is frequently mistaken for the Toyota Supra, and vice versa. First, second and third generation Supras were assembled at Tahara plant in Tahara, Aichi while the MKIV Supra was assembled at the Motomachi plant in Toyota City.

Production of the MKIV Supra Model (as seen above) has since been discontinued. However a new 5th Generation of Toyota Supra was revealed in late 2015, proceeding a full concept showcase in 2016 under the name of FT-1. The sports car is first set to release into summer 2019 for the UK, and 2020 for the rest of the world.

Supra driven by member of RedSuns in First Stage

Hideo Minagawa's Supra as it appears in Fifth Stage

Hideo Minagawa's Supra as it appears in Arcade Stage

Specs shown are for the RZ models, which are turbocharged.

The Supra is a grand touring car, which means it is not built to be nimble. It has a poor front-biased weight distribution, which improves stability, but means it is prone to corner entry understeer and corner exit oversteer due to wheelspin, like the AE86. This means the tires will wear out very fast if the car is pushed too hard.

Retrieved from "https://initiald.fandom.com/wiki/Toyota_Supra?oldid=24171"
Community content is available under CC-BY-SA unless otherwise noted.