Tsugumi (緒美・つぐみ Omi Tsugumi, known as Tricia in the Tokyopop version) is the high-school aged female cousin of Keisuke and Ryosuke Takahashi. Outside of her aforementioned cousins, none of her relatives are shown. Her surname is unknown.

After school one day, Tsugumi is picked up by her cousin Ryosuke, who is acting as her tutor. Tsugumi tells Ryosuke that her summer classes aren't going well, and jokes that she must have the same dumb genes as Keisuke. She tells Ryosuke that she doesn't even care if she doesn't get into college, as she doesn't even know what she wants to do. She envies Ryosuke, as he's always known he wanted to be a doctor. Ryosuke tells her that he has to live up to his father's expectations, and that he doesn't know if he would be good at being a doctor, or if he even really wants to be one. Tsugumi tells him that he'll be a great doctor, and he thanks her.

Tsugumi in Chapter 39, with her friends

Ditto, with her friends 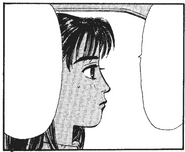