Akina SpeedStars was driving upto Akina together after Project D's victory in the Tochigi Prefecture when suddenly a car appears behind them. Takumi who was driving with Itsuki in his AE85 thought it was the same car which defeated him a while before in Akina. Soon the car passes them and it reveals itself to be a grey Silvia S15.

After reaching the top and talking about Project D and their battles, the grey S15 stops aside them and the two drivers of the car exit, introducing themselves to be circuit racers from Tokyo. After looking at their cars and speaking rather low about them, especially after learning they don't race in the circuits, Koichiro Iketani asks them to leave the area if they were there just to mock them. Angered, the Tokyo drivers got back in their S15 and drove away, only to stop a few distance from the start line on Akina. Realizing they were waiting for a battle, Iketani gets ready for a race, while asking Takumi to be there as support, just in case if he loses.

Soon Iketani starts first in his S13, followed by Takumi in Itsuki's Eight-Five. Realizing they had started, the Two Guys from Tokyo starts and follows Iketani. They note that Iketani has rather good corner entry, but they were not worried about it as they had the superior car. Takumi following them gives details about the battle, including the fact that while Iketani has better driving techniques making for a better corner entry, the Tokyo guys have better car, making for better corner exit. All this shocking Itsuki next to him, realizing he had improved a lot compared to last year. Soon Takumi realizes that Iketani will be passed after the next corner due to the long straight present after that, which happens as predicted. The Tokyo guys tries to gap Iketani, but was surprised to find a pair of headlights after the next corner. They try to gap the car, but was shocked to find the car closing their gap after the next corner. They thought it would be the same S13, but the Glass guy next to him realizes it wasn't the same S13 they had battled earlier. But the Fatty driver didn't need to hear that - he was concentrating for the technique he learnt from circuits for the upcoming hairpin. As they both neared the hairpin, Fatty suddenly braked deeply, shouting his technique 'Extreme-Ultra-Super-Late-Braking', but then to their surprise, the car following them, an AE85 passes them in the hairpin using the gutter technique and proceeds to dust them off. On total shock of what happened, they didn't realize their car was crashing into the bank of another corner until later.

It was later on revealed after the battle that they went to a hot spring, as said by the SpeedStars.

The Two Guys from Tokyo in chapter 262

The Two Guys from Tokyo racing 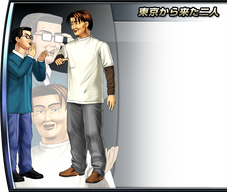 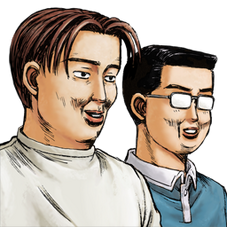 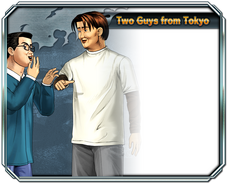