Usui Pass (碓氷峠, Usui-tōge) is a mountain pass that lies between the Nagano and Gunma Prefectures in Japan. It has served as one of the major transportation routes in central Japan since at least the eighth century. It is the home course of Impact Blue. It is also the home course of the Drift King, Keiichi Tsuchiya.

The pass is perhaps famous for the consecutive arch bridges that lie on the outside of the pass.

The Usui Pass as a circuit in early Arcade Stage games 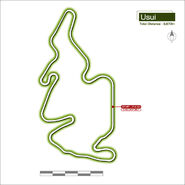 The Usui Pass as a circuit in later Arcade Stage games